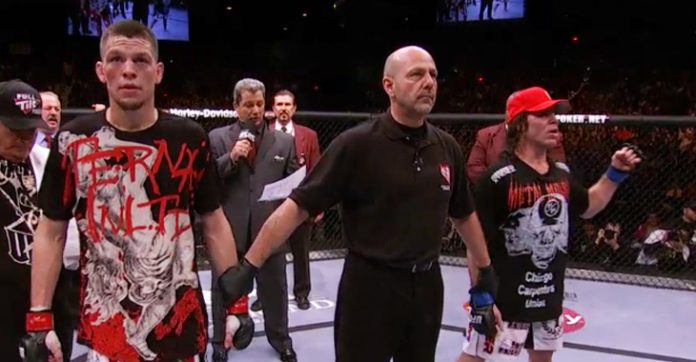 Fresh off the heels of Jon Anik going on record backing up Nate Diaz as a draw on his own, he gets called out by an old foe. Conor McGregor was always factored in as an opponent for Diaz’s return, but since then fights with Eddie Alvarez and Tyron Woodley has been talked about, but nothing ever happened. But none of those fighters have the Stockton soldier’s name in his mouth, this time it’s Clay Guida. Not only does he want to fight him again, but he wants him to smoke all the weed he wants.

“Hey Natalie, want a rematch? I’ll see you in the 312. Chi-Town, unless you’re scared. Oh, and don’t forget to bring your painkilling weed pen. You’re gonna need it, homie. Don’t be scared. Yo, what’s up 209 b-tch? Yeah, I’m talking about you Nate Diaz. We scrapped it out about nine years ago, but maybe it was a fluke. So, what do you say we do it one more time for the fans? And when you sign on that dotted line, before you get into the cage, make sure you get real, real high this time. So when I spike you on your head and put you in a full nelson like last time, you won’t feel a thing. See you in Chicago, homie.” – Clay Guida via his official Instagram.

Of course, USADA will think differently about Clay Guida’s weed clause if Nate Diaz pops in-competition, but that aside it’s an unexpected match-up. The last time the 209 fought Guida it was 2009. Clay Guida used his infamous wild, caveman wrestling to nab a split decision win over Nate Diaz way back at UFC 94. A former Strikeforce lightweight champion, Guida had his ups-and-downs at featherweight before recently returning back to 155. He’s on a two-fight win streak with his last victory being a violent first-round finish over Joe Lauzon.