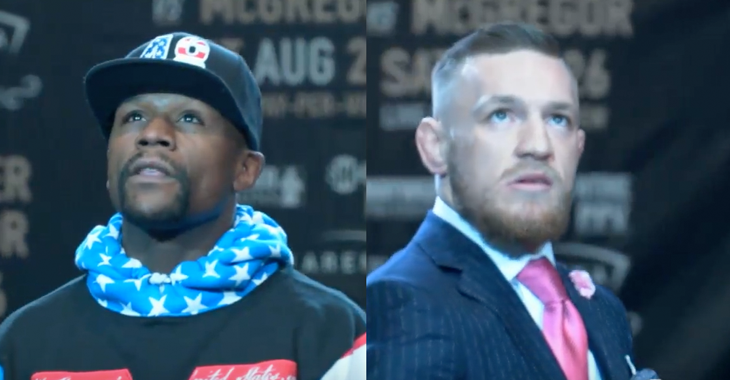 Conor McGregor boxing Floyd Mayweather was one of the biggest fights of all time. Depending on which numbers you’ve seen. it either outperformed Mayweather’s fight with Manny Pacquiao or raked in just underneath it. The UFC lightweight champion made a ton of money, of course not as much as Mayweather, and Showtime definitely made a fortune. One business man though, in his own right, thinks that the two fighters could earn even more fighting inside an MMA cage.

“If Floyd would fight Conor in MMA I think he’d do a bigger gate and a bigger PPV than boxing. People will say Conor will probably take him out or choke him out, but those two guys could sell anything. They would sell that fight, people would buy it and I think it would break the record from the weekend before last. If Conor takes him down, chokes him out and Floyd taps, there’s no loss of respect there. If you tap out it just means it’s his night and you go on to the next fight. Why not let him do it?”

“I think when you look at what MMA fighters have to do — they have to box, they have to wrestle, they have to do Thai boxing and jiu jitsu. They have to combine it all together. That doesn’t mean a boxer can’t do the same thing and go study jiu jitsu and go study wrestling and become an MMA fighter. If a boxer wants to take the time and really learn the art of MMA, and he has a big name in boxing and wants to come over, why wouldn’t we want to see that?” — Scott Coker, president of Bellator, told The Telegraph.

No question that a Conor McGregor/Floyd Mayweather rematch would still do huge numbers, but would transporting it into the UFC somehow make it earn more? Chris Weidman foresaw a trilogy fight, but who knows. After the boxing match has come and passed, anything is possible. Don’t forget, both Bellator and Coker’s former promotion Strikeforce co-promoted kickboxing and MMA at one point and time. Maybe Coker is going to try and get his piece of the boxing game.