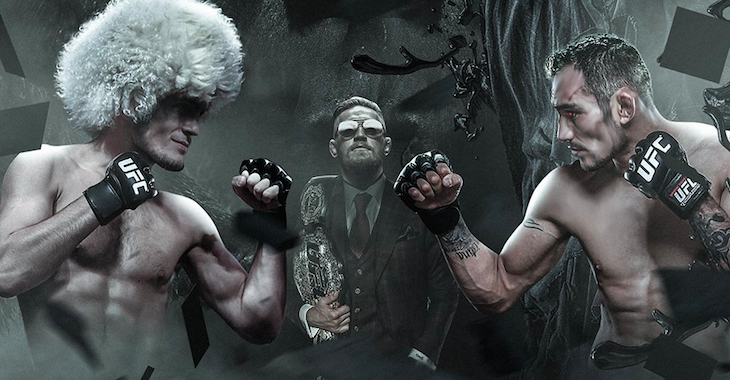 Last night, in the co-main event of the stacked UFC 219, Dagestani lightweight contender Khabib Nurmagomedov picked up yet another dominant win, violating the dangerous Edson Barboza for three, brutal rounds, and ultimately capturing a clear unanimous decision. With this win, Nurmagomedov is now an unbelievable 25-0 overall. More importantly, he is the clear-cut, undeniable number-one-contender at lightweight, whether we’re discussing challengers for Conor McGregor‘s undisputed lightweight title or Tony Ferguson’s interim lightweight title. In fact, the three lightweight stars would now seem to have one of the most gripping three-way rivalries in the history of MMA.

To commemorate this awesome lightweight rivalry, acclaimed graphic artist BossLogic has created an epic poster that pays tribute to all three fighters. See it below:

“If UFC approves, I’ll fight both Conor and Tony in the same night. Why not? I swear, this is no joke.” @TeamKhabib

While Conor McGregor is typically the strong silent type when it comes to his lightweight rivals, Khabib Nurmagomedov and Tony Ferguson have both acknowledged their peers in the last 24 hours.

“Real belt is 25-0,” Nurmagomedov said at the UFC 219 post-fight press conference. “This is real belt. They’re all fake belts. To be honest, real belt is Tony Ferguson. Conor, he has only one fight in UFC at 155 and he have champion. He beat Eddie Alvarez. He’s good fighter, but he’s not champ. I think lot of people can beat him in 155. This is my opinion. I think lot of people can beat him at 155. He has good boxing, good timing, but he don’t have wrestling, he don’t have grappling, he don’t have conditioning, but he have a belt.”

Don’t Care If The @ufc Approves, I’ll Cut @TheNotoriousMMA … Drop @TeamKhabib & Move Up To Welterweight Either B4 Or After I’m Done w/ This Division & Rid It Of The Trash At The Top. Pollution Has Accumilated Over The Years, Time To Clean House #DefendOrVacate🖕🏽😎-TheeChamp https://t.co/l6XkH50ZQY

Who do you think comes out on top in matchups between Conor McGregor, Tony Ferguson and Khabib Nurmagomedov?