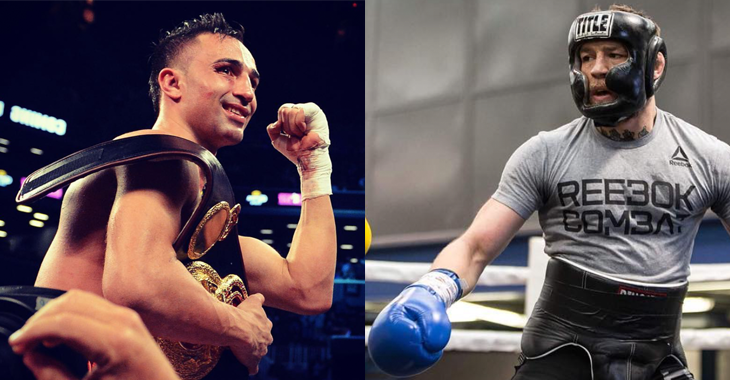 News that former two-division boxing champ Paulie Malignaggi would be helping UFC lightweight champ Conor McGregor prepare for his August 26 boxing match with Floyd Mayweather was met with widespread intrigue and excitement. Unfortunately, things have taken a nasty turn since the pair’s latest sparring session, as Malignaggi has taken issue with the way he’s been portrayed by McGregor and his team. This tiff ultimately resulted in Malignaggi’s permanent departure from McGregor’s camp.

While Malignaggi has now left McGregor behind, he has continued to lambast the UFC champ on Twitter. His latest verbal assault occurred after a fan reminded that McGregor was submitted by Nate Diaz not all that long ago.

Watch how he rolls over n gives his back then doesn’t protect his neck, he wanted 2 be choked out so he could tap n end the misery #NoBalls https://t.co/GhlCTb7K2J

Despite this beef, Malignaggi will be a part of the broadcast team for Mayweather and McGregor’s anticipated August 26 showdown. It will be interesting to see how his training with McGregor – and his subsequent falling out with the Irishman – will effect his commentary.

Mayweather, meanwhile, is a sparkling 49-0 as a pro boxer. After his last fight, a 2013 decision defeat of Andre Berto, the boxing legend elected to hang up the gloves. Yet this lucrative crossover fight with McGregor was apparently enough to pull him back to the ring.

What do you think of this beef between Paulie Malignaggi and Conor McGregor?