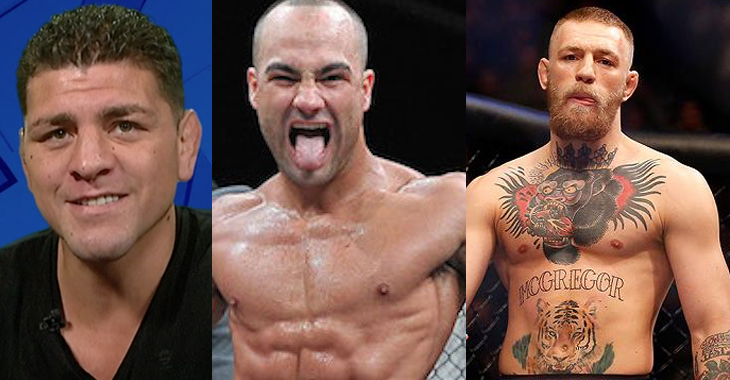 Nick Diaz takes pride in the amount of time and training he has put in throughout his career, and for good reason.

The Stockton scrapper has a long history of fighting and has been fighting professionally since he was 18-years-old.

The older Diaz brother was a guest on the Opie Radio show recently and spoke about his training regiment and how he still outworks the champions in the UFC. “That’s the thing too, I make 170 pounds,” Diaz said who drops down from 195. “Like, you got Alvarez fighting McGregor. He’s small. He’s shorter than McGregor. He should fight at 45. But, you know why he doesn’t do that? Cause he’d have to do the diets I do, he’d have to do the miles, put in the miles that I do. I put in miles, I put in rounds, I’m on the mat doing jiu-jitsu.

“These guys don’t have black belts. If they do, they don’t have real boxing background. McGregor don’t have no black belt in jiu-jitsu. He just learned jiu-jitsu like what, before this last fight.” Diaz went on to explain how belts don’t come easily under Cesar Gracie.

“It’s a very serious thing getting a purple belt or blue belt under Cesar Gracie back in 2004, 5, 6, all that stuff,” Diaz said. “I was like one of the first American black belts under a Gracie or something like that, like back you know way back. I’ve had my black belt for a long time. And it’s a big deal. I haven’t given anyone any belts. And you know, who are these people passing out belts like it’s, like go win a competition with that belt. See how you do. It’s not gonna happen, you know what I mean?

“It takes a long time to learn jiu-jitsu and these guys don’t want to invest in that and then the ones that have, they’re not gonna go and do boxing, like traditional. They’re gonna do kickboxing and that’s gonna be enough for them.”