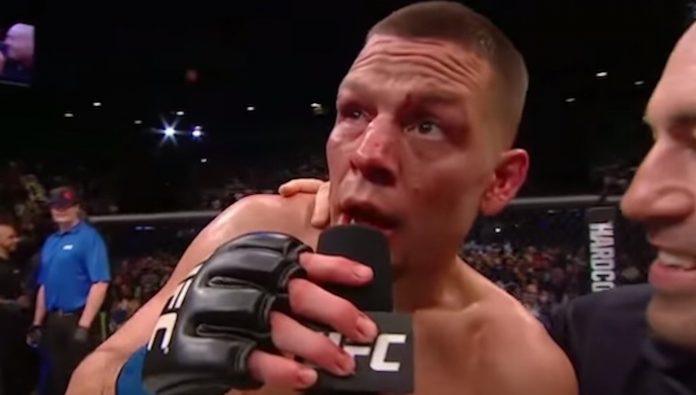 On Thursday afternoon, Conor McGregor and his entourage showed up at the Barclay’s Center in Brooklyn, NY—the host venue for Saturday’s UFC 223 card—and all hell broke loose.

Even by McGregor standards, it was a terrible scene, as the Irishman and his team went berserk, throwing garbage cans, dollies, chairs and more at the UFC 223 fighter bus, which was packed to the edges with the card’s fighters…

McGregor’s attack left several passengers—including strawweight champ Rose Namajunas—covered in glass, and UFC 223 fighter Michael Chiesa in the hospital, where he’s currently being treated for cuts on his face.

As expected, this debacle drove the MMA community into an absolute frenzy, and prompted reactions from many of the game’s biggest names.

Without further ado, here are some of the best reactions to Conor McGregor’s rampage in Brooklyn—including one from his arch rival Nate Diaz, who surprisingly sided with him.

He shouldn't have been trying to punk his boy when he was alone, like a bully. Then he expects not to get rolled on fukn rookie..
And then stay on the bus
haha u guys got punked ….

@TheNotoriousMMA is a piece of shit.

Just wait till I show up to NYC in the morning. I WISH a mfer would throw some shit my way @TheNotoriousMMA #UFC223

What was your reaction to Conor McGregor’s ludicrous actions in Brooklyn? What do you think the future holds for the Irish MMA star?