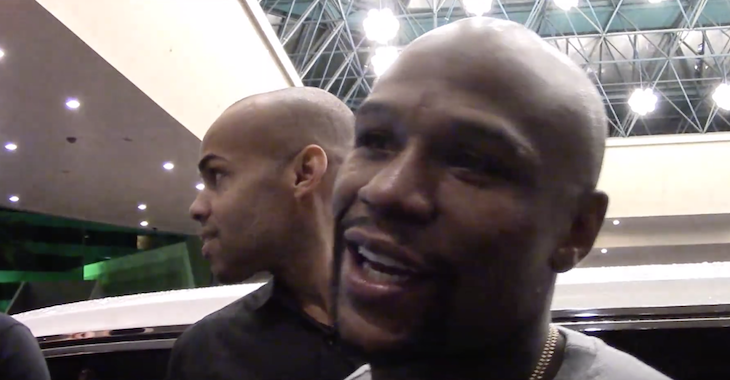 Throughout the course of 2017, the combat sports community has continued to receive updates regarding a potential Conor McGregor vs. Floyd Mayweather superfight.

To kick off the year, Floyd Mayweather offered Conor McGregor $15 million to fight him in a boxing match, which UFC President Dana White quickly shot down as he countered Mayweather with an offer of $25 million for both men. ‘Money’ quickly laughed off White’s offer, saying that he would not fight for less than $100 million.

While Conor McGregor initially remained quiet about the matter, in his recent pay-per view interview, the UFC lightweight champ stated that he and Mayweather needed to sit down together to figure out the details of the fight. Just days later, NSAC Chairman Anthony Marnell revealed that negotiations between McGregor and Mayweather were indeed taking place, however he admitted that the odds of a fight happening were still rather slim.

Now however, during a recent appearance at Showtime boxing fights in California, where Conor McGregor is currently located, Mayweather spoke about the fight, sending a message to McGregor, saying:

“Today, 2/24 on my birthday, they keep throwing the Conor McGregor name out there. Conor McGregor. You know, I said before, I’m here let’s make it happen!”

“Every time Conor McGregor go out there and compete, and win, he do it standing up. When Conor McGregor did lose, he lost on the ground, he didn’t lose standing up. He’s a hell of a fighter and he’s a very very tough competitor and he has the will to win. And the UFC gloves, it’s no different than boxing gloves it’s just a little bit smaller, but if a guy got power, he got power. And Conor McGregor got power.”

“My team, us, my number is there ($100 million) he have to get his thing in order with his team. Once Conor McGregor speaks with the UFC, his bosses, and then we can make it happen because we already know Floyd Mayweather is his own boss.”

“Lets make the fight happen, lets give the fans what they want to see. There’s only one fight out there that’s important, that’s Mayweather and Conor McGregor.”