Earlier this week, TMZ spoke with the UFC’s reigning lightweight champion, Nurmagomedov (28-0 MMA), who suggested that the Ultimate Fighting Championship allows the Irish star to handpick his opponents.

According to ‘The Eagle’, the promotion set Conor McGregor up with an “easy fight” in Donald Cerrone at UFC 246, and is now looking to cash-in on a rematch.

UFC President Dana White responded to those accusations in a recent interview with TMZ Sports.

“Yea, first of all, Conor McGregor does not handpick his opponents,” White stated. “You know, Conor McGregor has fought anybody that we have asked him to fight and who has been available. I mean guys have pulled out on Conor 2 or 3 times, Conor literally went to the gym and said ‘Ok who am I fighting.'” 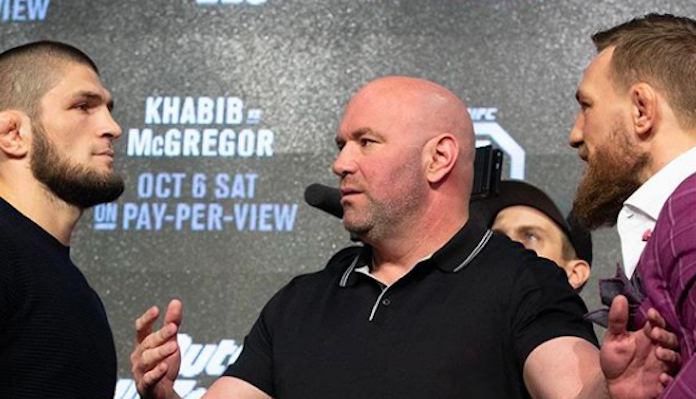 Dana White was then asked to share his thoughts on Khabib Nurmagomedov suggesting that Donald Cerrone was an easy fight for Conor McGregor.

Dana White went on to confirm that his hope is to setup a rematch between Conor and Khabib, this if ‘The Eagle’ can get by Tony Ferguson at UFC 249 in April.

“Yeah. Khabib, if he wins. But I don’t know if Conor wants to wait for him. We will see what happens. Conor might not wait.”

McGregor and Nurmagomedov first met at UFC 229, with the Russian emerging victorious by way of fourth round submission.

What do you think of the response from Dana White after Khabib Nurmagomedov accused the promotion of allowing Conor McGregor to handpick his opponents? Sound off in the comments section PENN Nation!