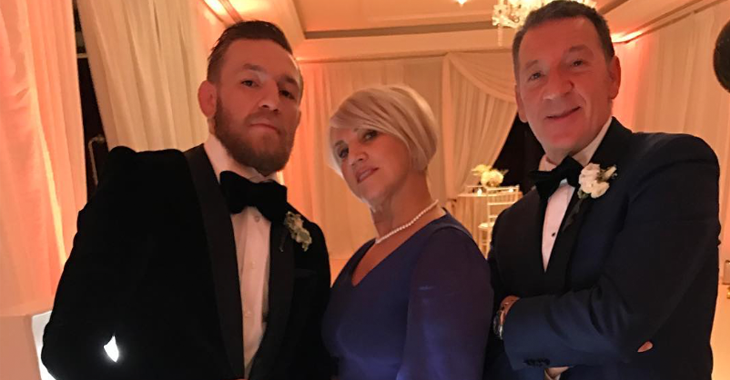 Conor McGregor’s name has been buzzing in media headlines this week even without any plans of fighting again in 2017.

Early this week, rumors spread on social media that “The Notorious” was involved in a bar fight in Crumlin, Ireland with at least one man linked to the Kinahan drug cartel.

Conor’s father, Tony, spoke with the Irish Mirror about the rumored incident that supposedly happened on Sunday night.

“It’s grown legs and it’s getting that ridiculous – it’s become funny. We have nothing to fear here whatsoever. There’s no one after us for anything. Conor’s father was then asked if the gardai (Irish police) have been in contact with the McGregor family and Tony reacted to the question to his same tune.

“Guards have no reason to be in touch. Why would they?”

When asked where Conor was, Tony replied that he was simply at home with his baby and girlfriend.

“We’re all just settling down for Christmas now. I’ve just got the grandson’s presents in today, they just came in from America.

“I’ll be wrapping them, putting them under the tree for the big day. That’s it.” Conor also made headlines today when he showed up late to a court hearing for a speeding violation he got last year. McGregor pleaded guilty and was ordered to pay a fine from a judge who was not happy about his tardiness to the hearing. McGregor then left the courthouse and delivered a message saying “Come and get me” out his car window to the media as he and his entourage sped off.