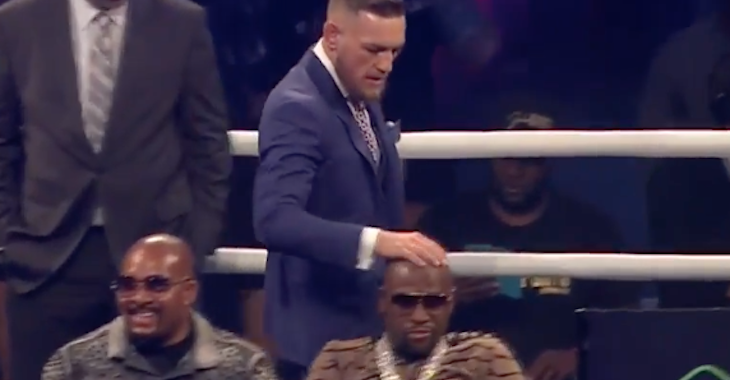 Friday afternoon in London, UFC lightweight champion Conor McGregor and undefeated legend Floyd Mayweather both appeared in a boxing ring in London for the final stop of their world tour before their August 26th fight date.

We all need a little lift sometimes pic.twitter.com/iXabnibJdb

Conor McGregor went on a rant over the platform shoes, which he called “high heels” saying:

“Mate, you’re 40 get that fucking phone out of your hand like a fucking kid. 40 year old man, what the fuck? He was wearing high heels yesterday! Check the face-off picture from yesterday, and check it from the day before, proper high heels that bitch was wearing! You shoulda worn em on the first day you stupid baldy twat.”

McGregor then proceeded to rub Mayweather’s head, much to the worry of UFC President Dana White: