This marks the fifth time that the UFC has booked a bout between ‘El Cucuy’ and ‘The Eagle’, however none of the previous four contests ever came to fruition. Freak injuries and botched weight cuts were the cause of the previously scheduled Ferguson vs. Nurmagomedov bouts falling apart.

Fight fans are hoping that the fifth time is the charm, and that Tony Ferguson and Khabib Nurmagomedov will finally be able to settle their differences inside of the Octagon. 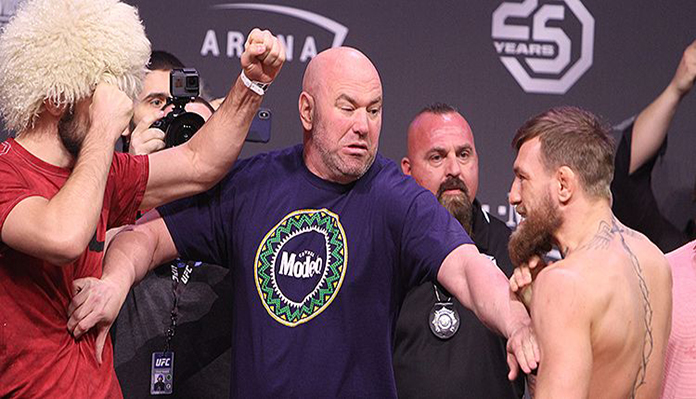 The reason Schaub believes that UFC officials are overlooking Ferguson is simple, they simply can’t stop talking about a future rematch between Conor McGregor and Khabib Nurmagomedov.

“This is the other thing. I heard Dana go, Conor vs. Khabib would be the biggest UFC fight ever. And they keep saying Khabib this, Khabib that. Dude, Khabib has the toughest fight of his life coming up in April. The toughest fight of his life. That is not a gimme. That is by far the worst matchup he’s ever experienced in his life.” Brendan Schuab explained on his Below The Belt Podcast. “Let’s say Khabib gets out of (UFC 249) with a win, a decision. I promise you he ain’t finishing Tony Ferguson. If there’s a finish, it’s Tony finishing Khabib. Bet money on that.”

UFC President Dana White confirmed his intentions to have Conor McGregor face the winner of April’s Tony Ferguson vs. Khabib Nurmagomedov fight in an interview earlier this week.

While McGregor would like to stay busy in 2020, Brendan Schaub believes the Irishman could be on the shelf for a while if he waits for a rematch with Khabib Nurmagomedov.

“However, let’s say Khabib beats him, which I’m sure Vegas has him by decision. That thing’s not gonna be pretty man. Khabib may get beaten the f*ck up. He might win, but he’s eating some elbows, there’s gonna be cuts, there’s gonna be problems. That ain’t going to be a fight where he can fight Tony Ferguson and then a month later take a fight. I guarantee you he gets a 120-day suspension after fighting Tony Ferguson. Win, lose, or draw he’s getting a 120-day suspension. That ain’t gonna be quick, that thing’s gonna be a f*cking war. Those are the best two fifty-fivers on the f*cking planet! That’s the best matchup at lightweight of all-time!”

Do you agree with Brendan Schaub that Dana White and UFC officials are overlooking Tony Ferguson in his upcoming fight with Khabib Nurmagomedov at UFC 249? Sound off in the comments section PENN Nation!