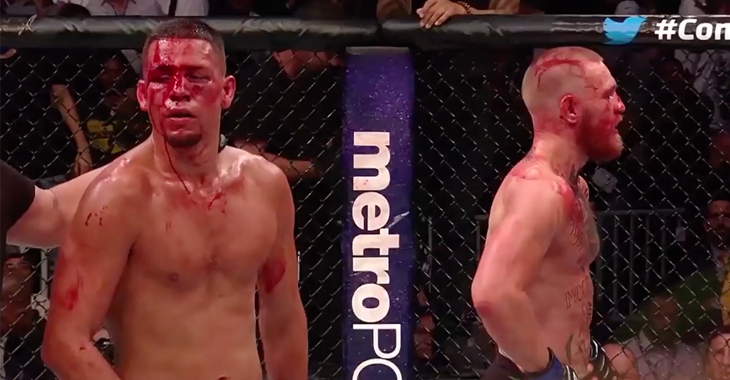 The thought of Conor McGregor vs. Nate Diaz 3 is just as polarizing as each superstar fighter is.

Some fans want nothing more than to see the two UFC pay-per-view kings go at it for a best of three series. On the other hand, there are those who want to see the fighters be matched up based off their records and rankings.

However, are there any fight fans that are concerned with fights based on the damage they could possibly take in certain stylistic matchups?

“I would love to see it but I’m going to say no because I believe a third fight would either end or dramatically shorten the career of one or both of these fighters,” Bayless stated.

“You know, I was fortunate enough to cover a lot of Ali fights. I was also fortunate to sit in the second row of the second fight between Conor McGregor and Nate Diaz. I was shockingly impressed at what I saw.

“I was in the splatter zone, the blood zone. That was as close to Ali vs. Frazier 3, you know it as the “Thrilla in Manila,” as I’ve ever seen two men contesting each other, pushing each other, challenging the wills of each other, pain tolerance of each other to the point that Ali, Frazier, nearly killed each other. They put each other in the hospital and I don’t think either was remotely the same after that fight. And, I think a lot of that happened in this fight.

“Remember, it’s as close to bare knuckle fighting as you can get. They were wailing on each other. They were exchanging punch after punch, shot after shot, knee after knee. But, it was mostly fist on bone, fist on cheek, fist against nose, fist on foreheard, fist against lips and to me, I agree, it looked like it changed the facial structure of Nate Diaz’s face. He took an unholy beating and Conor McGregor did have to leave on crutches.

“So, again, Dana White was on with us last week saying, ‘I tried to talk Conor out of both of the fights because obviously he’s 15 pounds lighter. He has six inches shorter reach and it’s not right for him to have to take on such a bigger man. And, Nate’s pretty good with his fists. Conor McGregor is great with his fists.

"I don't think they can take a third fight. Somebody's career would be shortened." — @RealSkipBayless on a McGregor vs Diaz 3 pic.twitter.com/E9G6B4XI1o

“So, they pushed each other to the brink, twice. Especially in the second fight. I don’t think they could take a third fight. Somebody’s career would be shortened and I don’t want to see that happen.”

Do you think a third fight between Conor McGregor and Nate Diaz would potentially end one or both of their careers with another five-round war? Sound off in the comments!