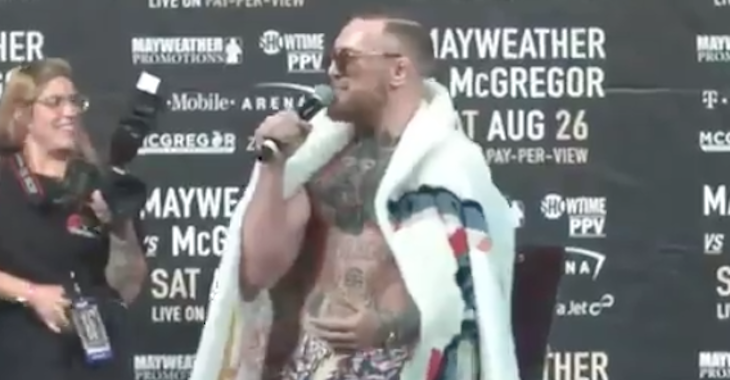 Thursday night in New York, both Conor McGregor and Floyd Mayweather appeared onstage for the third stop of their world tour. Once again, McGregor took the mic first, to address the crowd in attendance.

Mayweather and 50 have been friends for quite some time, a friendship that saw 50 Cent infamously call Mayweather out for the ALS ice bucket challenge several years ago, before then changing his mind and challenging the undefeated prizefighter to read “one whole page of a Harry Potter book”.

50 Cent of course has been keeping a close eye on the world tour, commenting on the Toronto stop of the tour with this Instagram post on Wednesday:

😳he shouldn't have said that. I can get away with that, but Champ gonna kill him for saying that. LOL OH SHIT!!!

Now, 50 Cent has taken to Instagram to respond to McGregor calling him a “bitch” in New York on Thursday:

👀what the fuck wrong wit this white boy, you fighting Floyd not me fool. LOL

50 Cent wasn’t the first person McGregor has taken aim at in the buildup for the fight. The UFC lightweight champion took aim at Showtime Exec Stephen Espinoza during Wednesday’s stop in Toronto, calling Espinoza a “fucking weasel” repeatedly after the UFC champ blamed him for cutting his mic off during the tour’s first stop in Los Angeles on Tuesday.

Tune in to BJPenn.com on Friday July 14th to see the final stop of the world tour!