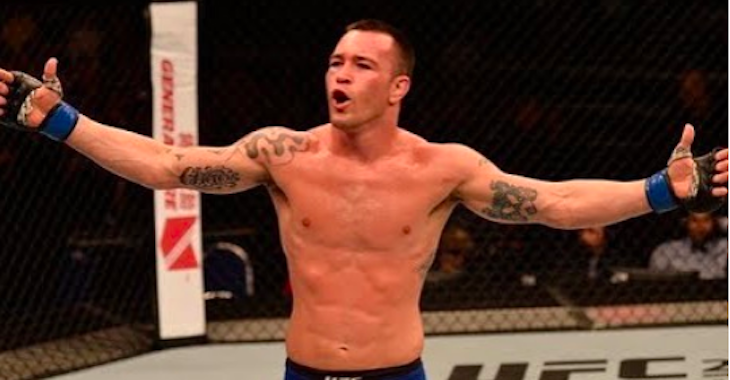 If this exchange didn’t make it abundantly clear, Colby Covington is not a Kenny Florian fan, and he greatly disagrees with some of the analyst’s recent comments.

“He’s over on UFC Tonight, he’s sucking Woodley’s dick,” Covington said of his beef with Florian on the latest episode of BJ Penn Radio. “I think Woodley gave him a prescreening before the show. ‘Hey, Florian. If you want to keep riding my nuts, then you have to say exactly what I tell you to say,’ and that’s exactly what happened. Woodley told Kenny Florian what to say, word for word, so he could ride his jock even more than he already was. Then, Kenny Florian goes out there, and he’s out here acting impartial. First off, he’s a Fox Sports rep. He’s supposed to be impartial to fighters or to the show and he’s out here acting [biased] against me and he’s plagiarizing. He’s a plagiarist in the first place. He shouldn’t even have a job with Fox, but I know he got on his hands and knees and he had to suck Dana [White] off real quick to get back in that job.”

“But let’s go, let’s move on,” Covington continued. “Let’s talk about what Kenny Florian and Tyron Woodley are talking about on the show. Kenny Florian is out here saying, ‘Oh, I need to win four or five more fights, blah, blah, blah, three fights more.’ Motherfucker, are you stupid? Are you that dumb? You’re a little midget, bro. You got a [lightweight] title shot when you were 5-2, when you beat Kit Cope, Alex Karalexis, and a bunch of nobodies that nobody has ever heard of, these guys that are washed up. You never beat even a legend or anybody in the sport.”

“Look at my record. I beat the best Asian superstar in the history of the sport, Dong Hyun Kim, and then, I beat the best Brazilian welterweight to ever do it. The guy [had the] second-most wins in UFC history, Demian Maia, and I left him bloodied and quit and beaten. [Florian] is a complete joke. I’m next in line for the title, or I’m fighting for an interim title. That’s what it’s going to be. Kenny Florian is out here, spreading fake news and being a fake fuck, a plagiarist and a [biased] little fuck, so I’m going to call him out, man. I’m the king of truth. I’m a realist. That’s what I do. I spread truth.”

From there, Colby Covington issued a decisive concluding statement.

“I don’t agree with Kenny Florian,” he said. “He’s a little midget due to the fact that he’s trying to talk shit to a welterweight. But he’s a little midget and he’s not even a good fighter, as it is. The guy is a complete joke, dude. I had to put him on blast and I hit him. I put him on blast with the truth. So if he wants to come out here and keep spreading this fake news and being partial because he’s riding Tyron Woodley’s jockstrap, then I’m going to call him out for it.”

What do you think of this Colby Covington vs. Kenny Florian beef?