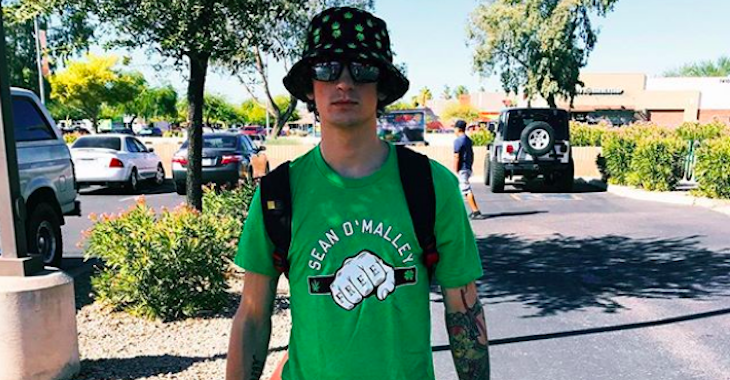 Sean O’Malley, the rangy, 23-year-old bantamweight who burst into the limelight with an epic knockout on Dana White’s Tuesday Night Contender Series (and by getting high with Snoop Dogg after this win), believes he knows who he’ll fight next.

Shortly after his impressive UFC debut, in which he bludgeoned a game Terrion Ware to a unanimous decision win, O’Malley was called out by Andre Soukhamthath, who recently won big with a knockout of Luke Sanders.

Apparently, O’Malley plans to oblige Soukhamthath’s callout, and expects the fight to occur soon – ideally when the UFC touches down in Las Vegas on March 3.

“That Andre Suka-something called me out on Twitter, I saw,” O’Malley said on the latest episode of BJ Penn Radio. “I think we’re going to probably end up fighting. None of that’s official, I don’t know. Obviously, he called me out so he’s probably down to take the fight. I’d like fight March 3rd in Vegas. I know [there’s] a pay-per-view there, so I’d like to get on that one. So that’s probably what’s going to happen. You know why? If he wants to fight me, he’ll have to fight me March 3rd in Vegas.”

“I was kind of just going on Twitter one day and saw that he called me out,” he added. “He was coming off a win. And it just seemed… I have a feeling that’s probably what’s going to end up happening. I don’t know. We’ll see. I think that’s probably what going to happen.”

Sean O’Malley then gave his thoughts on Andre Soukhamthath as an opponent.

“I did watch the tape on him, actually,” he said. “You know he was on that two-fight losing streak, and then took a short notice fight, a super short-notice fight. I guess [it was against] a super tough opponent, and [he] went and did what he needed to do. So, props to him for that. But, I think I’m going to go out there and out-strike him. That’s what I’ve been doing to everyone, that’s what I’m going to do to him, too. If that comes down to it, me versus him, I see me finishing him. I’m going to go out there and try to finish him like I always do.”

Who do you want to Sean O’Malley fight next? Would a fight with Andre Soukhamthath work for you?