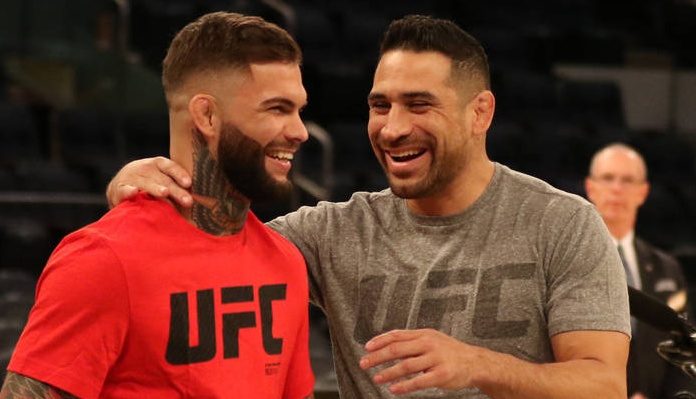 If there’s one person who has seen the most of the Cody Garbrandt and TJ Dillashaw rivalry it’s Team Alpha Male coach Danny Castillo.

Castillo who has coached both Dillashaw and Garbrandt in their respective careers has seen everything behind the scenes and out in the open between these two former friends turned rivals.

During an interview on the SFLC Podcast, Castillo opened up on the rivalry between Dillashaw and Garbrandt, by first calling the fight a ‘matchup of two of the greatest bantamweight fighters of all-time’.

There was a lot of praise from Castillo in the lead-up to this fight with Garbrandt’s preparation, saying that this version of ‘No Love’ is really the best he’s ever seen.

Thrown back into an immediate rematch with plenty of media hype behind this rivalry, Castillo says he believes Garbrandt is made for the big stage.

“for cody, he’s meant for this. i’m not saying he loves to be in the limelight, but he’s built to deal with the media and he has a great balance. that’s really rare for someone his age. that’s what champions are made of.”

There has been plenty said in the buildup to this fight about the maturity of Garbrandt and the way he handled losing the title to Dillashaw at 217, and Castillo said that maturity happened on the walk to the locker room following the fight.

“cody said it was no one’s fault but his own and right there i knew he hit a switch. after the fight i’d see him in the gym and i could just see the motivation. it could be motivation from losing to tj and it could also be motivation from his new marriage and his new child. all those things are running through him leading up to this.”

The feud between these two has really created some good heat for the UFC as the rivalry is legitimate and none of it has been fabricated. Castillo says the feud between Garbrandt and Dillashaw wouldn’t even need an Octagon for a fight to take place.

“the anger and the feud is real, it’s not fake. it’s not a d.c.-brock lesnar feud. it doesn’t matter if it’s in an octagon in front of thousands of people or in an elevator, these two would fight. i think taking that loss really put things in perspective for cody.”

The feud between Team Alpha Male and Dillashaw and his coach Duane Ludwig has been a big talking point in the bantamweight division but Castillo offers up respect to both parties and says it would be nice to put the rivalry chapter behind Cody and his career.

“it’d be nice to put it to rest but it doesn’t really bother me. t.j. and i used to be friends, duane was my coach in my last two ufc fights. i have respect for ludwig as a coach, there’s no lack of respect from me to the opposing side.

getting this chapter in cody’s career over with is not the biggest thing to me. they’re going to make a ton of money and the fight is going to be great for the fans. i’m happy for both sides. i feel this feud has pushed both fighters to another level.”

The hype behind this fight, the feud between these two fighters, and a title on the line, Castillo says this is going to be one of the best fights in bantamweight history. Castillo may be a Team Alpha Male coach, but he’s not one to have any negativity for this fight.

Garbrandt and Dillashaw will run things back in tomorrow night’s UFC 227 main event.