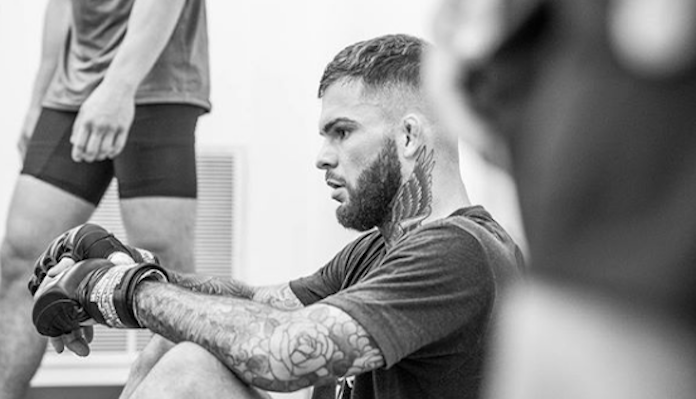 Earlier this week, former UFC bantamweight champion Cody Garbrandt was swallowed up by a social media firestorm after some controversial Tweets from his past were unearthed. The controversy was based on Garbrandt’s repeated use of the N-word.

Initially, Garbrandt was reluctant to address this controversy.

Cody Garbrandt might want to delete some of his old tweets. #UFC227 pic.twitter.com/pEqZhlJAaS

“I won’t even address that. That was when I was a teenager,” Garbrandt told Sherdog’s Anthony Walker when asked about these Tweets. “Anyway, next question.”

Asked @Cody_Nolove about the resurfaced tweets. "I was a teenager, next question" #UFC227

Shortly thereafter, Garbrandt was pressed by MMAjunkie. This time around, he issued a longer response, though he remained somewhat combative.

“First and foremost, it shouldn’t be embarrasing,” Garbrandt said. “I’m going to be a man and address it once, and that’s it.”

“It’s lyrics,” He continued. “I grew up hanging out with blacks, Puerto Ricans, Mexicans, selling drugs. That’s a street word we would always say. It wasn’t like I was using derogatory words toward anyone. That’s how we grew up. It was kind of normal. That’s it. It’s a learning experience for a lot of people to not use that word in this day an age.”

“Everyone’s just trying to figure out some negativity. I’m so positive, and I have great things going on this week. Nothing’s deterring me from my focus. That’s that. It’s the last time I’ll address this question. And I’m actually done with this interview with you, as well.”

Cody Garbrandt returns to the cage this Saturday night, in the main event of UFC 227 in Los Angeles, where he will battle his arch rival TJ Dillashaw in a highly anticipated rematch. Garbrandt lost the pair’s first bout, which went down at UFC 217 in November, by second round knockout.