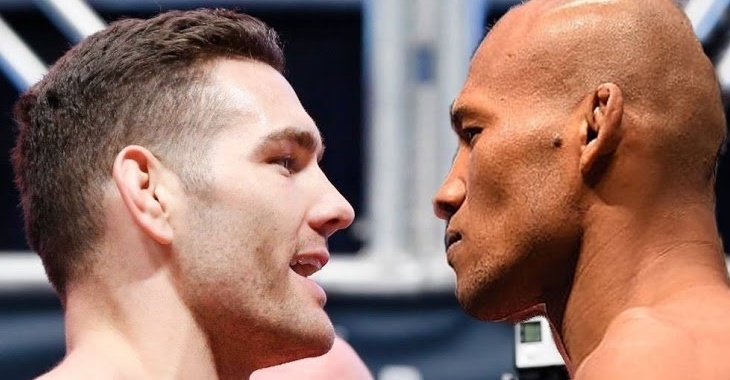 No time was wasted in finding Chris Weidman (14-3) a replacement after Luke Rockhold was forced out of their UFC 230 rematch earlier today.

After continued issues with his leg among various other injuries including a broken nose, Rockhold found himself with no other option than to pull out of this upcoming bout with the man he won the UFC title from in 2015.

Because of that, his fellow former UFC middleweight champion Weidman was left without an opponent. But that is the case no longer.

Weidman will now take on a fellow perennial top contender and former Strikeforce middleweight champion, Ronaldo “Jacare” Souza (25-6) on the November 3 card that is UFC 230 in the co-main event. Jacare was originally set to face David Branch that same night.

Weidman vs. Jacare is done, per Dana White. UFC trying to keep David Branch, who was scheduled to fight Jacare, on the card. Jared Cannonier is a possibility, but not done.

Weidman vs. Jacare is done, per Dana White. UFC trying to keep David Branch, who was scheduled to fight Jacare, on the card. Jared Cannonier is a possibility, but not done

UFC 230 has not been an easy card to get to for the organization as there have been several different fights made and moved around all over the card. Specifically at the top of it. But hopefully, it will be smooth sailing from here on out.

For Jacare, like Weidman, his fight last also came against the likes of the next middleweight title challenger and The Ultimate Fighter season 17 winner Kelvin Gastelum. Unlike Weidman, Jacare would lose to Gastelum via a very thrilling split decision.

A matchup between Jacare and Weidman is something that has been on the minds of many fans and enthusiasts alike for many years now as they’ve always been floating around each other at the top of the division but never wound up fighting each other. You know what they say…better late than never!