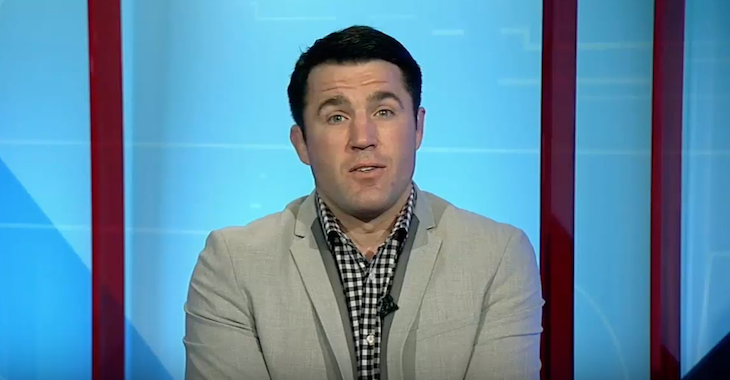 When the UFC was purchased by WME-IMG earlier this year, there followed a wave of controversial layoffs, as everyone from Tom Wright to social media specialist Shanda Maloney lost their jobs.

The latest high-profile UFC employees on the chopping block were UFC Hall of Famers Matt Hughes and Chuck Liddell, who were given desk jobs with the company when they hung up their gloves. Interestingly, however, fellow Hall of Famer Forrest Griffin, who was given a similar position when he retired from fighting, was not canned by the company.

In a recent episode of his podcast You’re Welcome, three-time UFC title challenger and current Bellator star Chael Sonnen gave his take on this ordeal, explaining that Griffin was the only former fighter of the bunch to take his job seriously.

His words (transcribed by Rory Kernaghan of Low Kick MMA)

“In fairness, if I’m buying a company I’m gonna look and see where the waste is,” Sonnen explained. “If I’m letting Marshall Zelaznik go, I’m letting these two knuckleheads who are on $30K a month, but don’t even live in the state go. Do you know why [Forrest Griffin] kept his job?” “He was the only one of the three who took his job seriously,” Sonnen continued. “What was supposed to happen, from a UFC standpoint, they looked after some of their boys who looked after them. The UFC was getting some bad PR for not looking after their fighters, and they also wanted to give the guys who did carry lifting early on some jobs that last forever. Chuck got the first one, and it’s $30K a month, and he doesn’t have to do anything. This is before the police ran him out of San Luis Obispo, so he wasn’t even in the state. Matt Hughes still isn’t in the state, he lives on the farm in Illinois. These are literally fake jobs.”

“They give a job to Forrest, and he takes one look at it and decides to take the job seriously. He shows up at 9:00 a.m. on Monday morning and they don’t even have an office for him because it wasn’t a real job. He just kept coming in, and then he started sitting in on meetings. If anyone was gonna keep the job it’s Forrest because he has contributed.”

Do you believe Sonnen’s account of Hughes and Liddell’s firings? Sound off, PENN Nation!