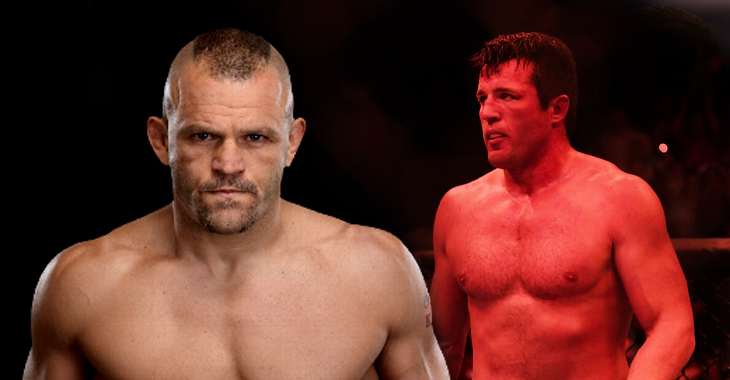 It seems like every couple of months, rumors start up again that MMA legend Chuck Liddell would end his retirement and return to fight at least one more time. The latest inkling was an Instagram post from Wanderlei Silva, but it looks like his previous feud with one Chael Sonnen is still very much alive and well. The two evidently got into some sort of altercation during the press tour for Bellator 192 which takes place this Saturday. Liddell may or may not be ready to come back to the cage, but Sonnen was ready to throw down right then and there.

“I come into the dressing room and there was Chuck [Liddell], face-to-face, and it was awkward. I was doing [The Rich Eisen Show] and he told me, ‘You got a message for Chuck? He’ll be here tomorrow.’ So I gave him a message to Chuck, thinking he would be there tomorrow. Turned out Chuck was in the back, watching it on a monitor, with my mother.”

“So, my mom and uncle had to get involved and it was just a big, colossal — I had to go one way and Chuck had to go the other, and it was weird. But I don’t think he’s going to fight again. I didn’t ask him point-blank because we were too busy yelling at one another, but he looked good, I’ll give him that. I mean, it looked like he was in shape, but I don’t know. I don’t know what he’s going to do. I’m up for [the fight] right now. I’m ready to go. I was ready to fight him yesterday in the green room, would’ve reached right over my mother.” — Chael Sonnen speaking to MMA Fighting.

While he may have some unfinished business with Chuck Liddell, he already has his hands full this weekend with Quinton ‘Rampage’ Jackson when the two kick off Bellator’s heavyweight grand prix. His last fight for the organization was finally putting an end to his rivalry with the other man to call out Chuck Liddell, Wanderlei Silva. A feud the two originally started back in the UFC. A win on Saturday would advance Sonnen in the tournament, getting him one step closer to the Bellator heavyweight strap, a weight up from the division he normally fights in.