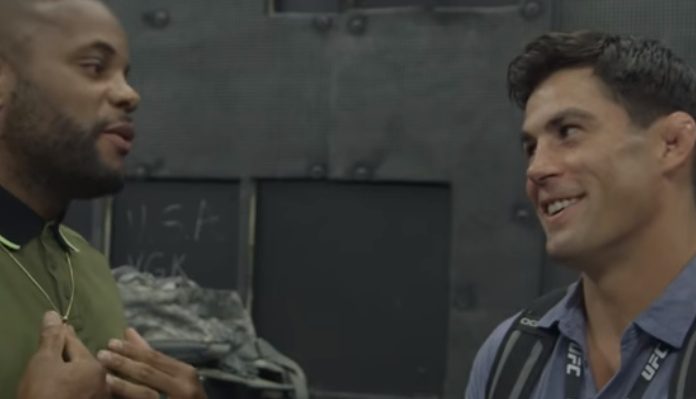 One of the attendees for the wild night of action was another former UFC champion in Dominick Cruz who was calling the night’s action alongside Joe Rogan and Jon Anik.

With Lesnar vs Cormier now seeming inevitable for sometime early next year, it’s a matchup that we can talk about.

Cruz did so recently on The Scott & BR Show. Interestingly enough, the former bantamweight king isn’t so sure it will end up happening regardless of what we’re told.

“Absolutely [there’s worry about PEDs for Lesnar].” Cruz said, “100 percent. If he makes it to the fight I’d be shocked. And I just mean that because USADA is the toughest anti-doping system there is on planet Earth. And that guy is absolutely doping. Period. No ifs ands or buts about it.

I mean he’s not been in mixed martial arts. So, of course, he’s been doing that stuff. How they’re going to get him to be clean on fight night is beyond me. But they can make it happen, they will and if anyone can make it happen it’s the UFC and USADA making sure that everyone is clean. With those two working together he’s not getting in there unless he’s clean.”

It’s well documented that after Lesnar’s last MMA fight at UFC 200 in July 2016 that he tested positive for banned substances.

Despite having this feeling, Cruz didn’t say he was opposed to the idea of the fight though. He went on to discuss that there are different perspectives when it comes to a fight like this one.

Unfortunately, that’s the world we live in. If it doesn’t have shock value, it has nothing. So Daniel Cormier’s giving the people what they want.

Now from an analytical standpoint, Brock Lesnar and Daniel Cormier are giving the people what they want. And what that does is it spreads the money for not just them but for mixed martial arts in general.

On top of that, you got to remember what sport has one of the biggest cross-sport followings parallel to mixed martial arts? WWE.”