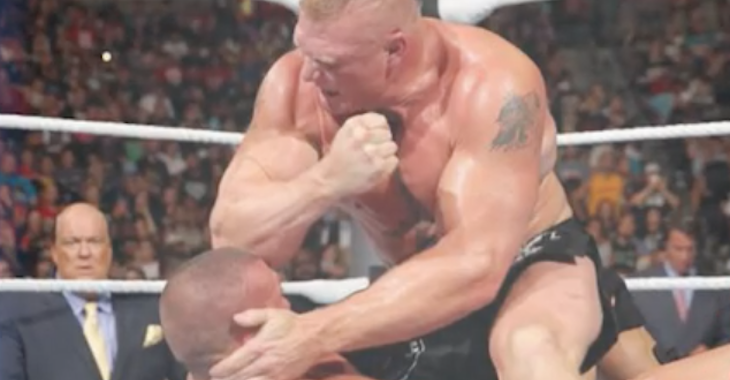 Former UFC heavyweight champion Brock Lesnar made his return to the WWE ring this past weekend at the WWE’s ‘Summerslam’ Pay-Per View event where he wrestled Randy Orton.

The match was the first for Lesnar following his UFC 200 win over Mark Hunt, after which it was revealed that he failed a random out-of-competition drug test prior to the fight, as well as a fight night drug test.

During the course of Lesnar’s match with Orton, he landed several elbows to his opponent’s head, one of which opened up a massive gash. While many of the other blows looked to be fake, the two elbows landed by Lesnar looked completely real.

As blood poured from the massive cut on Orton’s head he appeared noticeably rocked from the blow, forcing the referee to stop the match.

Since the match, it has been reported that the ending of the match was improvised due to the fact that the elbows landed by Lesnar were not intended to knock Orton out.

In the wake of the incident, Lesnar was fined $500 by the WWE according to WWE.com.