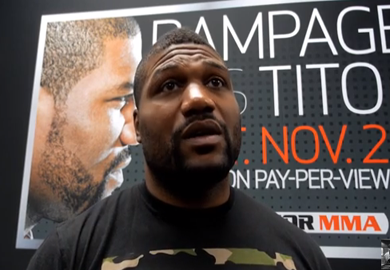 “I met Bjorn and I just felt his energy. You look him in the eyes when you talk to him and you know like, ‘Man, this guy gets it!’ I heard of Bellator, but, I didn’t know how it was. The other shows kind of leave a bad taste in your mouth. Terry Trebilcock from King of The Cage, before I met Bjorn, was the only promoter that was cool to me. Dana, he started off cool, but when you get on Dana’s bad side then you might as well be an alien. But when I met Bjorn, man, he talked to me, he explained things and we sat down and you just feel his energy. And you can tell he don’t talk bad about anybody else. You always got to be worried about other people that talk bad about you because as soon as you walk away there’s a good chance people talk bad about you. I’m sure if someone crosses him he’s going to say something, me and him are a lot alike. I feel like he keeps it real. What he just said about pay-per-views, I totally agree with that. He’s not going to cram it down fans throats; every month do a pay-per-view. I think that’s what UFC is doing. I think the UFC now is messing up the sport. They just doing a lot of bad things and I just feel like Bellator, the way they doing things is kind of the future of the sport.”