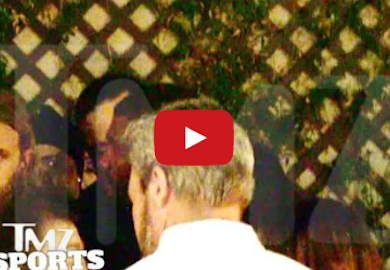 Mayhem Miller isn’t the only former UFC employee taking it to the streets.

As seen in the above video, former UFC light-heavyweight champion, Rampage Jackson isn’t scared to tangle outside of the cage either.

This altercation didn’t escalate too far, but after learning this man grabbed his girlfriend’s butt, Rampage was ready to tangle.

You can hear Rampage tell the guy, “TELL MY GIRLFRIEND SORRY AND YOU AIN’T GONNA DO THAT S**T NO MORE … OR YOU ABOUT TO GO TO THE F**KING HOSPITAL.”

When Rampage’s threat was met with a dumbfounded look from the clubber, the MMA fighter shot back … “You think I’m lying??? He thinks I’m lying!!”