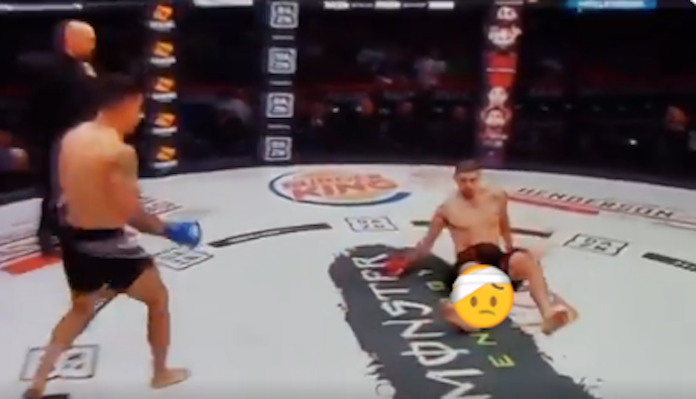 Mixed martial arts is a nasty business. Fighters routinely sustain nasty injuries in their bouts, from cuts, to hematomas, and of course, broken bones. That latter thing is just what we saw on the postlims of Bellator 226 last weekend, when Albert Gonzales took on Tyson Miller.

It was a sequence not unlike the final moment of the infamous Anderson Silva vs. Chris Weidman 2 fight, which left Silva with a leg like cooked spaghetti after Weidman checked one of his kicks. This time around, it was Gonzales who threw the kick, and was ultimately left writhing on the floor after Miller checked it.

See this nasty Bellator 226 moment below via ShayMyName on Twitter.

This unfortunate Bellator 226 bout marked Tyson Miller’s pro debut. While it certainly didn’t end the way he envisioned, he can at least take solace in the fact that he left the cage with a victory.

Gonzales, meanwhile, is now 1-2 as a pro mixed martial artist. Here’s hoping he makes a speedy recovery and can get back on track soon.