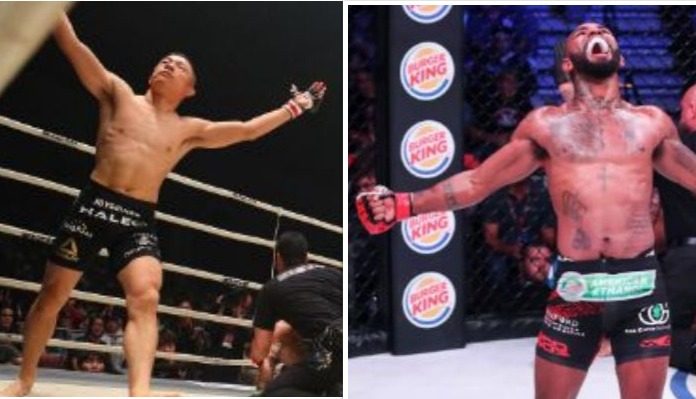 It’s definitely safe to say to that 2018 has been the year of the champion vs champion fights and as it continues to unwind, we aren’t done getting them.

I mean, let’s just look at things a bit closer here. The term “super fight” has absolutely been thrown around far too loosely this year as just because a fight may be champion vs champion, it doesn’t always make it a super fight. But that’s a different debate.

In the case of such, we’ve had a few this year so far and are already looking at potentially getting some more. First, there was the light heavyweight vs heavyweight championship clash between Daniel Cormier and Stipe Miocic. In ONE Championship we saw their lightweight and featherweight champion, Martin Nguyen attempt to capture a third title by challenging longtime bantamweight king Bibiano Fernandes.

Super fights/champion vs champion fights are fun and interesting. It’s a division’s best vs another division’s best. But when you can do something like that crossing promotions…well, why not? Bellator president Scott Coker seems to feel the same as he has a fantasy matchup between bantamweight champions on his mind.

This how you know Scott Coker is down for the fights like every other fight fan. At the #Bellator208 press conference, when I asked about champ vs. champ fights from other promotions, he said the following.

“[Kyoji] Horiguchi…him and [Bellator bantamweight champion] Darrion Caldwell should fight. Right? Let’s get it on! You wanna get it on? [Rizin founder Nobuyuki] Sakikabara, if you wanna get it on, let’s do it.”

Since departing the UFC for the Japan-based successor to PRIDE FC, RIZIN FF, Kyoji Horiguchi has been nothing but brilliance inside the ring. The 28-year old superstar has gone 10-0 since having suffered his second career defeat to Demetrious Johnson in 2015.

Each and every fight continues to show more of Horiguchi’s greatness whether it be at 125-pounds or 135-pounds…or even outside of MMA completely.

Just this past month Horiguchi took on the Japanese mega-prodigy, the 31-0 kickboxing wizard Tenshin Nasukawa. The fight was a kickboxing match and truly had the feel of Japan’s version of Floyd Mayweather vs Conor McGregor.

Horiguchi wouldn’t come out victorious but he made the fight a whole lot closer than many expected it to be and even appeared to be on his way to winning until Nasukawa landed a wild flying windmill kick that seemingly hurt Horiguchi. The official result was Nasukawa via unanimous decision.

As for the Bellator champion Caldwell, he has been rather dominant in his own right and has in the eyes of many established himself as a top 10 135er worldwide. 13-1 and having avenged his lone loss and defended his title, Caldwell now hopes to get a champion vs champion fight but the one he’s been seeking has been at featherweight against Patricio “Pitbull” Freire.

Caldwell’s last bout even came at featherweight when he easily dispatched of Noad Lahat via second-round knockout.

Perhaps Coker will be able to entice Caldwell with this matchup before a potential featherweight showdown with Pitbull. Surely Nobuyuki Sakikabara would be at least somewhat interested in this big cross-promotion matchup too as Horiguchi will run out of opponents eventually (if he hasn’t already).

The organizations are already on good terms and have shared fighters before such as the legendary Mirko Cro Cop. So what’s to stop them from making something happen here? Rizin does in fact like to go all out for their big New Years Eve shows…