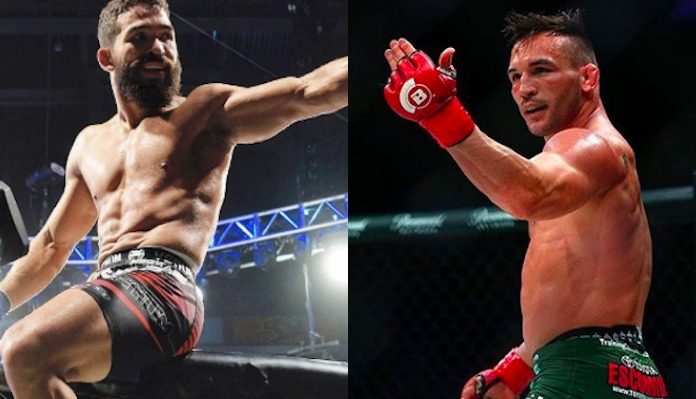 According to a report from ESPN, Bellator featherweight champion Patricio Freire will move up in weight to challenge lightweight champion Michael Chandler at Bellator 221 on May 11 at the Allstate Arena in Rosemont, Illinois.

The pair’s grudge match will reportedly be officially announced by the promotion in the coming days.

When the cage door closes on this championship battle, Patricio Freire will look to become the second fighter in Bellator history to hold titles in two divisions concurrently, following in the footsteps of Ryan Bader who, as of several weeks ago, owns both the light heavyweight and heavyweight titles.

Michael Chandler, meanwhile, will look to make the first title defense of his latest reign as Bellator lightweight champion, which began when he defeated Brent Primus by decision in December.

Chandler and Freire’s mutual disdain has been festering for years. Their rivalry rolled to a boil in in 2016, when Chandler knocked out Patricio’s brother Patricky. In the moments after this fight, Chandler and Patricio Freire had a heated exchange, and they’ve since been chomping at the bit to settle their differences in the cage.

Patricio Freire, on the other hand, is 28-4-0. In his last two fights, he’s defeated Daniel Straus, Daniel Weichel and Emmanuel Sanchez. Other highlights of his impressive career include wins over Henry Corrales, Pat Curran, Justin Wilcox, Diego Nunes, Wilson Reis, and Georgi Karakhanyan.

Who do you think will win this Bellator champ vs. champ fight?