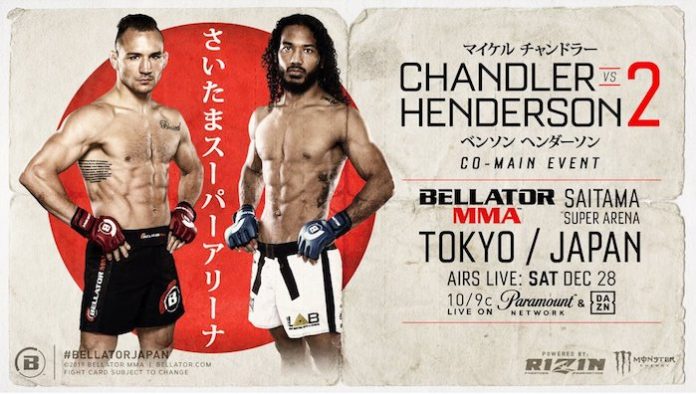 Bellator recently announced the rematch, which will serve as the co-main event on the Bellator Japan card, which takes place on December 29 at Saitama Super Arena in Saitama, Japan. The fight will be contested at a catchweight of 160lbs.

You can check out Bellator’s press release for the bout here.

Chandler and Henderson previously met at Bellator 165 in November 2016. The two put on an epic fight against each other, with Chandler getting his hand raised by split decision to defend the Bellator lightweight championship.

Since the first fight between the two, Chandler has gone just 3-2 in the Bellator cage. He lost his belt to Brent Primus by freak injury, then defeated Goiti Yamauchi and Brandon Girtz to earn another crack at the belt. Chandler won the lightweight belt back from Primus in his next match after that, only to lose it to Patricio Pitbull by knockout in his last outing.

As for Henderson, he lost a split decision to Patricky Pitbull after the first Chandler fight but has since gone on a nice win streak. In his last four fights, Henderson has beaten Roger Huerta, Saad Awad, Adam Piccolotti and Myles Jury to get back into title contention in the Bellator lightweight division.

Although this bout will take place at a catchweight of 160lbs, the winner of this fight should be in line for a fight against Pitbull for the Bellator lightweight championship later this year. Pitbull is currently involved in the Bellator featherweight Grand Prix and will be busy for the next little while, but when he is ready to return to lightweight the winner of Chandler vs. Henderson 2 may very well be next in line for a title shot.

Who wins the rematch between Michael Chandler and Benson Henderson?