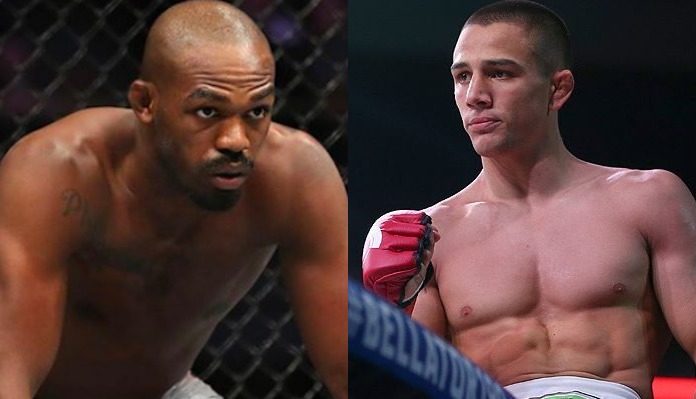 Bellator featherweight contender Aaron Pico is arguably the most hyped prospect in mixed martial arts since reigning UFC light heavyweight champ Jon Jones was on the come-up. In his last fight, however, Pico found himself face-down on the canvas after getting a little too aggressive against the fearsome Henry Corrales.

Speaking to MMA Fighting’s Marc Raimondi after the UFC 235 press conference on Thursday, Jon Jones shared a piece of advance for Aaron Pico.

“He’s the guy with the left hook to the body, right?” Jones began when asked about Aaron Pico. “He body shots people. I just saw the highlight of him being knocked out. My advice to him would be keep your head up. Keep your head up, really. Come back to the drawing board. Come back better. It looked like he wasn’t outclassed, it just looked like he got caught. So keep your confidence in the right place, cause obviously you’re on the right track, and come back even better.”

For what it’s worth Aaron Pico seems to be keeping his head up — just like Jon Jones recommended.

“There’s really no excuses to make,” he said at the Bellator 214 post-fight press conference. “I felt good out there. My training camp went well. I hit him. I think I have so much power in my hands, I don’t realize I knock people down. It happened so fast. Obviously I made a mistake by staying in the pocket too long. It’s a 50/50 chance of somebody getting knocked out. That sucks, it sucks bad. But hey, I’m 22 years old, I don’t have this figured out yet. It’s something that needs to be slowed down for me. I need to use my wrestling a little bit more and we’ll go from there. We’ll go back to the drawing board.”

“I just need to take my time,” he added later. “I haven’t gotten to use my wrestling because I’ve been knocking all these people out, but it’s a learning lesson against these veterans, they’re able to endure the shots and find their spots and weather the storm a little bit.”

What do you think of Jon Jones’ advice for Aaron Pico?