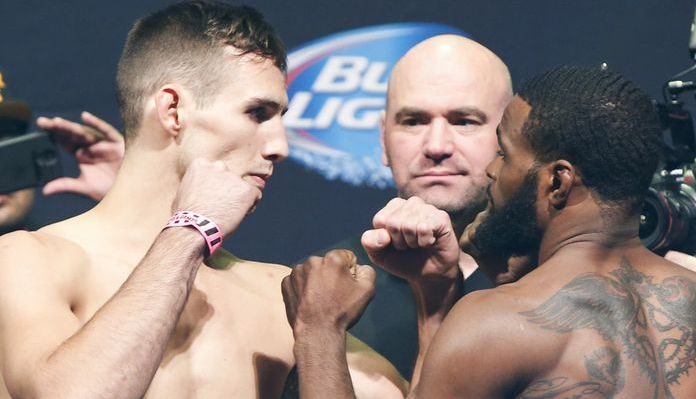 Bellator and RIZIN are back in the business of co-promoting.

It was recently announced that Bellator is sending their current bantamweight champion Darrion Caldwell to fight in RIZIN on New Year’s Eve. Caldwell will be heading to Japan to fight Kyoji Horiguchi for the RIZIN bantamweight title.

Ultimately, co-promoting is something fans love to see as it truly can showcase who the best fighters are in the world. If this trend continues, fight fans could be treated to some matchups that were once deemed to be impossible.

Here are four co-promotional fights that should happen.

This would serve as a champion vs champion rematch, in which Bellator welterweight title holer Rory MacDonald would take on UFC welterweight kingpin Tyron Woodley.

This fight makes a ton of sense, as many MMA fans believe that MacDonald is the best welterweight on the planet, having scored a decision win against Woodley back at UFC 174. In their first fight, which occured back in 2014, MacDonald ultimately proved victorious by way of unanimous decision.

Since that fight, MacDonald has gone 3-3, capturing the Bellator welterweight title in the process. Meanwhile, Tyron Woodley has gone 6-0-1 since his setback to “The Red King”. “The Chosen One” most recently competed at UFC 228 where he scored a second-round submission win over the previously undefeated Darren Till.

Fedor Emelianenko may very well be the greatest heavyweight of all-time. However, one knock on his record is the fact that Emelianenko has not always competed against top competition. Well, in this proposed co-promotional fight with Velasquez, Fedor would get the chance to build on his already storied legacy.

There is talk that Cain Velasquez could soon return to the cage, and both men are in the conversation for greatest heavyweight of all time. This is a fight which could ultimately prove who really is the baddest man on the plant.

The UFC’s women’s featherweight division is arguably the weakest weight class in the promotion. It is fairly new and the UFC have yet to invest in building up the divisions roster. With that said, Cris Cyborg has been defending her title against fighters who would normally compete at 135-pounds in her most recent title defenses. In Julia Budd, Cyborg would finally be matched up with a true featherweight competitor.

Budd has shown she is one of the best female featherweight fighters on the planet. If she happens to defeat Cyborg she could make the case for being the best female fighter, period. Ultimately, for Cyborg as well, she can fight someone who is close to her size and a female who cuts weight to get down to featherweight just like Cyborg. It is a great fight and one that just makes sense given the current state of the UFC’s featherweight division.

Gegard Mousasi vs Aung La N Sang would be a fantastic fight. Both fighters have competed at higher weight classes and moved down to middleweight. Ultimately, there is a debate that Mousasi is the best middleweight on the planet. However, Sang is also a very good fighter and is riding a five-fight winning streak and has a record of 24-10-1. Sang is currently a double champ in ONE Championship and would have the possibility of adding the Bellator middleweight belt to his collection.

What other co-promotional fights would you like to see, PENN Nation?