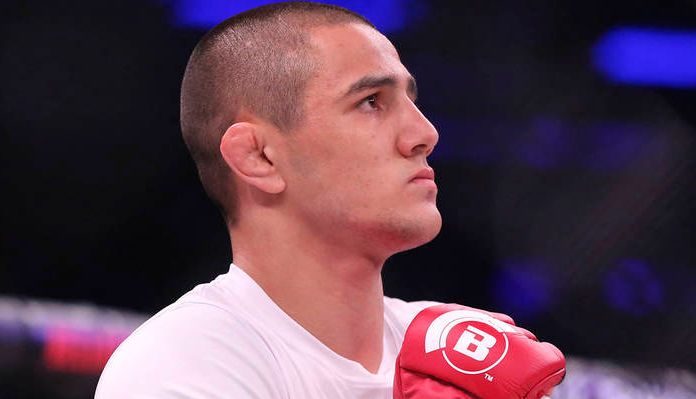 The 22-year-old is currently riding a four-fight win streak, with all four of those victories coming by way of first-round knockout. However, for Pico, arguably the best attribute of his game is his wrestling and so far he hasn’t had to use it.

Aaron Pico will return to the cage on January 26, at The Forum, where he is set to take on Henry Corrales. With that, Pico is ready to show the world just how good of a wrestler he is. If he happens to knock out Corrales, well, so be it.

Ultimately, even before the scrap was announced, Pico was preparing for this fight, knowing that he and Corrales would eventually cross paths.

“To be honest with you, I knew I was going to fight him. He was on a winning streak, I knew it was bound to happen,” Pico said to BJPENN.com. “I got the phone call saying Henry Corrales and I said ‘absolutely, let’s do it.’ It’s a good opponent, it is a guy on a four-fight winning streak and that is ultimately what you want. Each fight you want to keep improving and fighting guys that are going to better your career and he is one of those guys. He is a tough guy, that is for sure.”

Corrales is another step up in competition for Pico. However, even though it is a tough fight, Aaron is extremely confident that he will once again get his hand raised on January 26.

“I don’t really make predictions for the fight. I know he is a guy that likes to throw a lot of punches. He is very tough, he is a veteran,” Aaron Pico said. “I am just going to use all my skills. If I use all my skills, my wrestling, my hands, I use my angles I believe it is going to be a great night for me. To be honest with you, I have a lot better skill set than him. He is just a tough guy who likes to come forward and throw wild shots. We are prepared to do everything and we are prepared to throw them, use my angles, take him down and control him. I am ready for anything.

“The biggest attribute with him is he throws wild shots and he is very tough. Like I always say, ‘it is very different fighting Aaron Pico’ it really is. The power I generate behind my punches,” he added. “Just to know I could take you down at any second is a little bit nerve-racking. A lot of people say he has very good takedown defense but he hasn’t wrestled the highest level like I am doing right now.

“Right now, I am wrestling with the best guys in the world, some of the guys are two-time world champions, Olympic champions, and I am able to take them down. I don’t think it will be any different taking down Henry,” Pico continued. “I just feel like my skill set is very high, higher than his. Make no mistake this is MMA and all it takes one shot. I am very aware of what he can do.”

If Aaron Pico does emerge victorious against Henry Corrales, a shot at Bellator gold could be just around the corner.

“I think it takes me one step closer to fighting for a world title. That is ultimately what I want to do. He is on a four-fight winning streak, I am on a four-fight winning streak,” Pico said. “I think it definitely puts me in negotiations for a world title. Maybe one more, or two more but it doesn’t hurt and puts me one step closer to ultimately getting the belt.”

However, one challenge for Pico is the fact that his close friend and teammate A.J. McKee also appears very close to a title shot. McKee’s dad, Antonio, is Pico’s coach, meaning it is unlikely A.J. and Pico would fight each other. Meaning, it very well could be a race to see who gets the title shot first, but fighting each other is something they will have to talk about.

“We haven’t really talked about it. I know that is a question I get a lot, but I know we are not going to fight. The biggest thing is focusing on the task at hand and that is my job,” Pico said. “His dad is my coach so I am not going to put coach Antonio (in that position). And, I train with A.J. so why would I fight him? There are other guys to fight. That is something we all have to sit down when that time comes.

“We haven’t really discussed it but yeah, absolutely we need to figure out what we need to do as far as this. The bottom line is we aren’t going to fight each other. We will see. That is something we have to sort out, so I can’t really give you a clear answer, for what his plans are but my plans are to fight Henry Corrales.”

No matter what, the goal for Aaron Pico remains the same, defeat Corrales and worry about the future when the future happens. One thing is for sure, after training with Rafael Dos Anjos, Pico believes his striking and grappling have gotten significantly better. He can’t wait to show the world just how good he is again.