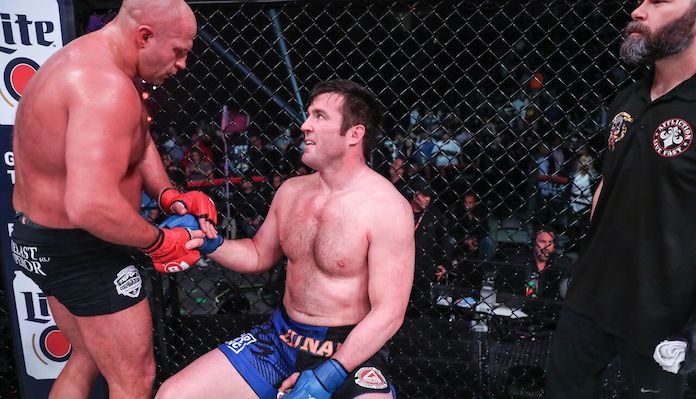 Last Saturday night, in the main event of Bellator 208, former UFC middleweight and light heavyweight title challenger Chael Sonnen stepped into the cage with heavyweight legend Fedor Emelianenko. Although Sonnen had some success with his wrestling in this fight, he was ultimately stopped in the waning moments of the first round, as Emelianenko unleashed a veritable meteor shower of ground-and-pound upon his head.

Speaking on The MMA Hour on Monday, Chael Sonnen opened up on this loss. He says that, after being dropped early and pounded out on the mat, he’s in significant physical pain. No surprise there.

“Physically, everything hurts,” he said (transcript via MMA Fighting). “[Emelianenko] hit me with a missile about five-seconds in. That one still hurts a little bit. But other than that, I am doing well…My teeth are okay. If I had one wish going into a fight, aside from serious injury, it’s that I won’t lose a tooth. I had that same wish since I started this when I was 19 years old. But, yes they are all intact.”

Apparently, physical pain isn’t the only thing Sonnen’s plate at the moment. He’s also doing his best to swallow a side dish of emotional anguish.

“Emotionally, I get heartbroken about these things,” he sad. “From a competitive standpoint, I have dedicated my whole life to this since I was nine years old and I would have started earlier if my dad would have let me. He wouldn’t let me start until I was nine. It hurts. It hurts really bad that you don’t get those moments back.”

Demonstrating his world-famous way with words, Chael Sonnen then explained that this sort of inner turmoil is simply par for the course in the life of a fighter.

“I’ve had these feelings before,” he said. “I am convinced, in my interpretation, this is what it means to be a fighter. Somewhere over time that word became corrupted. It became about the punches and the kicks. But I’ve always believed it’s feeling like I’m feeling right now and getting out of bed anyway and facing the media and getting back on it. So now I have to be a fighter. I prefer to be a winner, I prefer to be on top of the world and looking down on everybody else. But today I’ve got to fight.”

What do you think of these comments from Chael Sonnen? Who would you like to see him fight next?