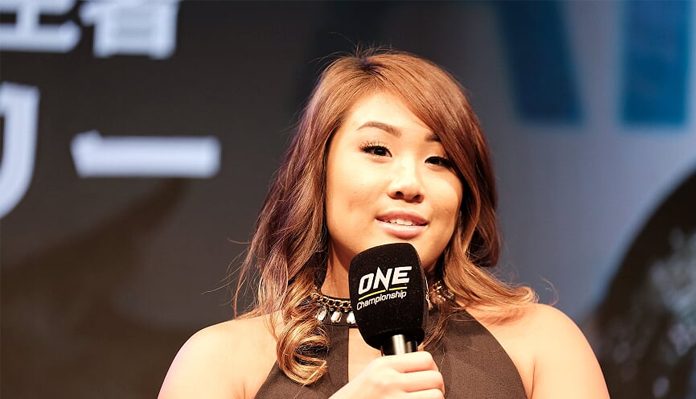 ONE women’s atomweight champion Angela Lee is currently gearing up for a massive title fight with ONE strawweight champ Xiong Jing Nan. If Lee is able to win this mammoth showdown, she will become a two-division ONE champion. She’ll also reaffirm her status as one of the world’s best female fighters.

Considering the amount of talented female fighters that are currently competing on the sport’s biggest stages, thats saying something.

“There’s so many talented athletes out there, especially the female mixed martial artists,” Angela Lee said of her peers on episode 101 of BJPENN.COM Radio. “I just watched a recent UFC card and the level of talent… it just keeps growing everywhere you look. I have some friends in different organizations; in the UFC, in Invicta, in Bellator, and I think that just to see the level of respect that we get now, it’s really something to be proud of.”

When asked about the fighters that she admires, Lee mentioned UFC strawweight champion Rose Namajunas, as well as former UFC bantamweight champion Miesha Tate, who she’s trained with in the past.

“Some of the female athletes that I really admire, I think that Rose Namajunas in the UFC, not only is she a very talented mixed martial artist, but she’s also very kind … [she] looks like a very kind human being,” Angela Lee said. “I’ve never actually gotten a chance to meet her. One of my friends, someone that I’ve been able to train with before is Miesha Tate, and she just had her baby girl and I think she’s one of the coolest human beings out there, as well. So I think that the talent out there, it goes awhile back, but now we’re finally being able to be credited for all our hard work and I think that it’s the coolest thing. I’m so proud to be in this era right now.”

While Lee feels a lot of admiration and respect for her peers in other promotions, that doesn’t mean she wouldn’t love the chance to test her skills against them. She hopes that, one day, co-promotion between the sport’s top organizations will allow her to share the cage with other high-level MMA champions.

“Give me the champions,” Angela Lee said. “I would love if they co-promoted, and I think that would be such a treat for the fans. I think that it would really show the best of the best.

“I think it would be just an amazing opportunity for all the fighters to be able to really test themselves in the highest level of competition out there, ’cause there’s so many different global organizations with their own champions. Who knows if that day might come, but I think that the fighters are always game, it’s just the promoters [stopping it from happening].”

Catch Angela Lee back in action at ONE: Heart of the Lion in Singapore on November 9.