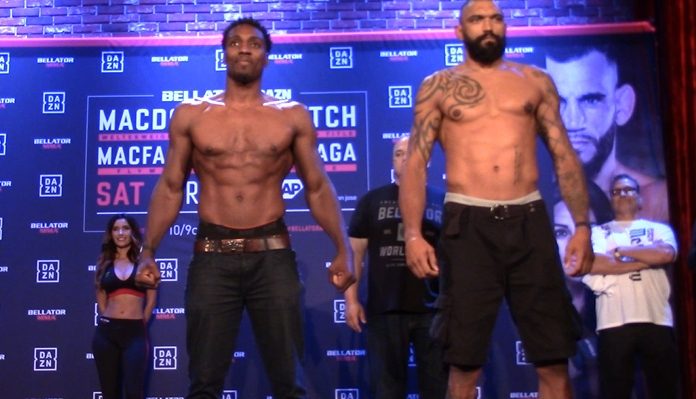 After the Bellator 220 main card action was kicked off by lightweights Gaston Bolanos and Nathan Stolen, we got to the big boys at light heavyweight for a rematch.

In November 2016, “Mr. Wonderful” Phil Davis dominated the then champion, Liam McGeary over the course of five rounds. It was now McGeary’s chance to seek revenge.

The fight starts slowly with each being cautious before McGeary lands a leg kick. McGeary pushes the action as Davis looks for his shots. McGeary lands a left hand before another leg kick. Solid jab lands from McGeary followed by a Davis pair of leg kicks. Davis starts to pressure forward now where he starts to land more leg kicks. Big overhand right from McGeary lands. Davis sneaks a left jab in on McGeary. He then gets more aggressive and backs McGeary up forcing him to counter back. Superman punch from McGeary pushes Davis back only for him to come forward again. Body kick lands from Davis. And another. McGeary searches for the right before throwing a head kick that Davis retaliates with himself. Round ends.

Round two begins more actively with Davis going to the body with kicks while on the back foot. Some stiff leg kicks land for Davis before he lets the hands go a little bit. Nothing crazy lands. McGeary looks a bit confused by the point. Davis fakes a takedown to throw an uppercut that doesn’t land. His leg kicks, however, a different story. McGeary throws an overhand left leading to Davis bringing him in for some knees to the body. McGeary starts to look for the jab more. Davis finds a shot with his right accompanied by more leg kicks. McGeary still searching for jabs. The latter half of the round sees McGeary looking for jabs with Davis throwing leg kicks consistently. End of round two.

McGeary comes out aggressive in the third. The two trade leg kicks. They trade solid punches before Davis lands the first takedown of the night landing in half-mount before scrambling to McGeary’s back and landing some big ground and pound shots. Elbows land from Davis before they get up and Davis lands an arguably illegal front kick to the chin. McGeary finds a head kick shortly after. Davis works the body with a kick. McGeary pressures and gets Davis to the cage briefly, Davis counters with knees. Looping left from Davis just misses. Davis left hook hurts McGeary and he gets taken down. Nasty ground and pound lead to a tap from McGeary.