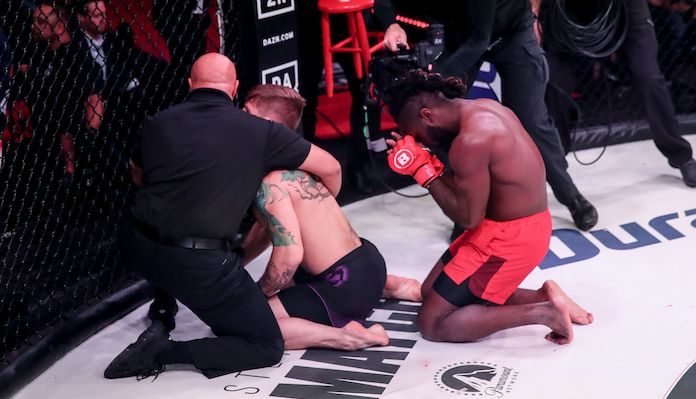 Kevin Ferguson Jr., better known as Baby Slice, scored a short-notice victory at Bellator 232 over the weekend. That win is no more thanks to the Mohegan Tribe Department of Athletic Regulation.

According to a report from MMA Fighting, his 38-second TKO win over Craig Campbell has been overturned to a no contest, as Campbell was fouled during the brief contest.

Early in the fight, Campbell attempted a takedown and was hit with a flurry of Baby Slice elbows that ended the fight. Many, including Big John McCarthy — a longtime referee and color commentator for Bellator MMA — agreed during the replay of the finish that at least one of the elbows landed in the back of the head of Campbell.

Tribe Department president Mike Mazzulli, according to MMA Fighting’s report, states that commission rules allow the use of instant replay in “an exhibition stopped due to injury to an unarmed combatant in order to determine whether the injury in question was caused by a legal blow.”

After reviewing the footage more closely, Mazzulli acted according to commission rules.

Baby Slice, the son of legendary fighter Kimbo Slice, moves to 3-2 with one no contest in his professional mixed martial arts career. He suffered a TKO loss at the hands of Corey Browning in his prior appearance at October 2018’s Bellator 207 event. The 27-year-old trains at Team Bodyshop under the tutelage of Antonio McKee.

Do you agree with the Mohegan Tribe Department of Athletic Regulation’s decision to overturn the TKO victory for Baby Slice to a no contest?