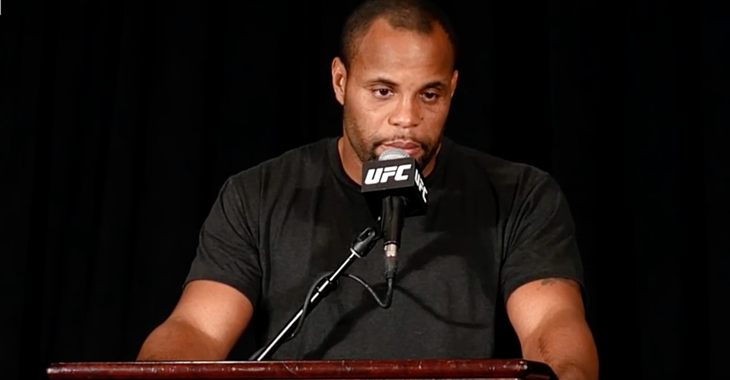 Fans were surely disappointed to find out on Friday that UFC light heavyweight champion Daniel Cormier has been forced out of his UFC 206 title defense due to an injury.

MMA Fighting first reported the news that Cormier pulled out of the UFC 206 main event where he was slated to take on #1 UFC ranked light heavyweight Anthony “Rumble” Johnson in a five-round championship rematch. Cormier tweeted on Friday following the news breaking of his withdrawal from UFC 206, “@Anthony_Rumble I left a message for you on ur phone. I apologize. We Will get to rock and roll bruh. Once again my apologies. DC.”

@Anthony_Rumble I left a message for you on ur phone. I apologize. We Will get to rock and roll bruh. Once again my apologies. DC

Although surely frustrated with the news of Cormier’s injury, Johnson took to twitter where he wished a full recovery and “nothing but the best” for the UFC light heavyweight champion. This marks the second time this year that Cormier has had to pull out of a title fight due to suffering an injury. Back in April, “DC” was forced to pull out of a UFC championship bout against Jon Jones as they were scheduled to fight in a rematch at UFC 197. The two were then rescheduled to fight at UFC 200 for the UFC light heavyweight champion title. However, that fight was canceled days before the event was scheduled to take place after it was announced that Jones tested positive for banned substances.

Daniel Cormier and Anthony Johnson first fought at UFC 187 for the vacant UFC light heavyweight title. Cormier ended up finishing Johnson in the third round by securing a rear-naked choke on “Rumble” in the third round.

Will we see Anthony “Rumble” Johnson stay on the UFC 206 card with an opponent that steps in on short notice? Share your thoughts in the comment section on who you think would be a good matchup to help save UFC 206.