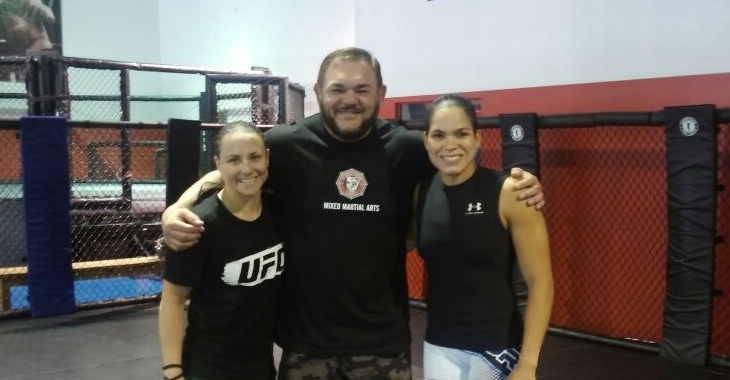 UFC 219 left us with two big questions. Those being, “who’s next for Cris Cyborg?” and “who’s next for Khabib Nurmagomedov?”. These are both questions we have yet to get answers too. But…we appear to be getting closer to the answer for Cyborg more than we are for Khabib. The reigning UFC Featherweight champion, Cyborg has called for a fight with top 3 Featherweight, Megan Anderson since her win over Holly Holm at UFC 219. That fight, however, isn’t possible just yet as Anderson has yet to be cleared to compete. The second name that was brought up was current Bantamweight champion, Amanda Nunes who is all for the fight. She isn’t the only one though, UFC president, Dana White also voiced that that’s the fight he would like to make next and today, American Top Team head coach and coach of Nunes gave his take on the fight when he spoke with MMAJunkie:

“People want to see it, I think they have the best opportunity to leave their marks on history. I believe for the weight division, Amanda is going to be extremely well-prepared,” he said. “She’s not going to have to make the weight. She’s probably going to be strong in that division. I do believe the compensation (for) the strength that comes from Cyborg definitely will be the tools that Amanda has on her side. I think it’s the perfect fight. It’s a perfect match. It’s a champions fight – it’s something we don’t see happen often.

I think it’s not 100 percent, but 1,000 percent going to happen. I think it’s something everybody wants to see, even the ones that think they’re going to lose something. I just think it’s a champions fight. I think they need to have that fight. It’s a big push for MMA in general, females and males. People want to see it. I think they have the best opportunity to leave their marks on history.

I believe that when you fight and you get to be a contender, it’s really hard. When you win and you become a champion, it’s even harder than that. But when you have a chance to leave your name in history, I think you have to do it. It’s something that’s good for everybody. If Cyborg was an American Top Team fighter, yeah, it really doesn’t make any sense. But still, I think the chance of what’s going to come from the fight is something only a few people have to do in life”

Nunes vs Cyborg would unquestionably be the biggest female fight of all time and just a great super fight for the fans. Many might not know that Nunes was actually a Strikeforce Featherweight prospect back when Cyborg was the champion. She fought her first seven career fights at 145 before dropping to her current home of 135. At Featherweight, Nunes defeated the likes of Ediane Gomes and most notably Bellator’s current champion, Julia Budd. Nunes KO’d Budd in just fourteen seconds.