Home » MMA News » ACB » Listen to the Sound of this Brutally Perfect Knee ... 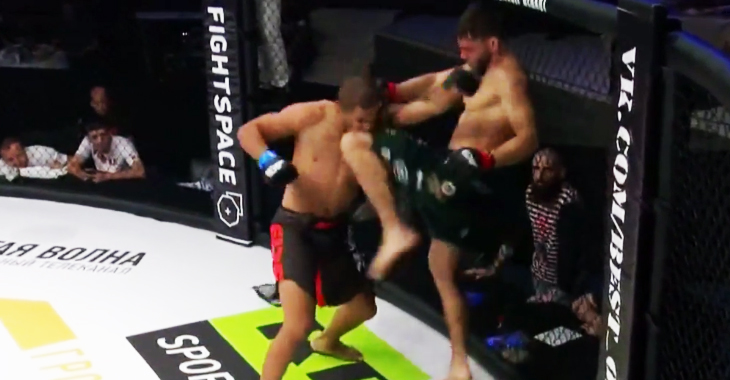 If you’ve ever ventured out of the UFC comfort zone to watch Absolute Championship Berkut, then you already know that most of their events produce highlight reels or at the very least crazy moments that will make you yell at your laptop. If you aren’t familiar with ACB, then now is the perfect time, especially since there is a drought of UFC action until Conor McGregor finishes his boxing bout with Floyd Mayweather. At ACB 67 earlier today, Alexandr Shabliy knocked out Gleristone Santos with a knee that was so picture perfect, it deserves multiple angles.

Alexandr Shabliy KO's Gleristone Santos at #ACB67. Over & over Shabliy displays impeccable timing w/ his knees. Some of the best in the game pic.twitter.com/Dh3JBaruVX

That is terrifying. It’s almost unfortunate how brutal the strike is because the technique is lost by its incredible sound. You can see Santos blitzing Shabily and wildly swinging from side-to-side. When you’re swinging that recklessly, the whole upper body moves. Alexander Shabily bit down on his mouthpiece and timed Santos’ swaying. He misses with a counter hook, but adjusted on the next sequence by cracking him (literally) right in the dome piece with that amazing knee.

Good on Shabily to walk over and pay respects to Santos after a vicious strike like that. Also, what’s up with the rad wizard on the back of that flag? If all of those angles above weren’t enough for you, down below you can watch the entire fight courtesy of ACB themselves.