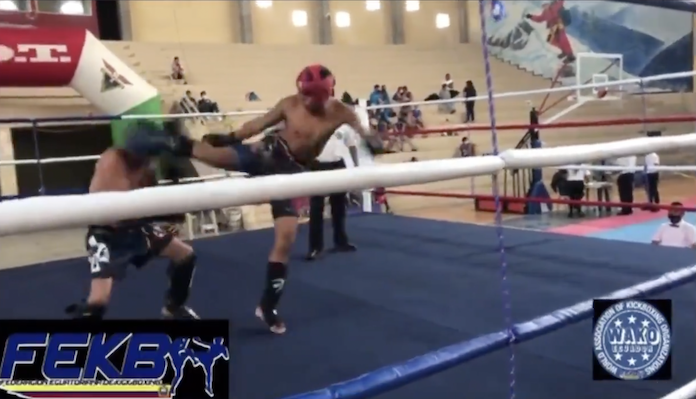 Cahuasqui took part in the KickBoxing National Selective and Pacific Cup Championship last week in Ecuador. Despite wearing headgear during the fight, a high kick from his opponent connected to the left side of his head and knocked Cahuasqui out cold. According to “El Norte,” there were no paramedics ringside and the fighter was rushed to the hospital. He suffered a brain hemorrhage from the high kick and doctors were not able to save him as the young fighter was later removed from his ventilator and pronounced dead. Cahuasqui was just 25 years old and his death is a very tragic one as a young man has lost his life.

Journalist Alberto Astudillo B. confirmed that Cahuasqui tragically passed away from the high kick, adding several details and sharing a video of the kick that ended his life.

I regret to report that the athlete from the Imbabura records, Joel Cahuasqui, has just died, according to reports from those close to him. The athlete had a brain stem hemorrhage after a match held in the Pacific Cup and National Selective Kickboxing Championship.

According to the report, Cahuasqui died on April 1. It’s another reminder of the dangers of combat sports. Even though this young man had headgear on, the kick was so powerful that it went right through the protection and caused a brain hemorrhage. It was an extremely sad scene for everyone who was there in attendance watching and of course to this young man’s family, as their son will no longer be with us. It’s just a very tragic circumstance all around and you have to feel sad for everyone involved in the situation.

We here at BJPenn.com wish the family of Joel Cahuasqui our deepest condolences.