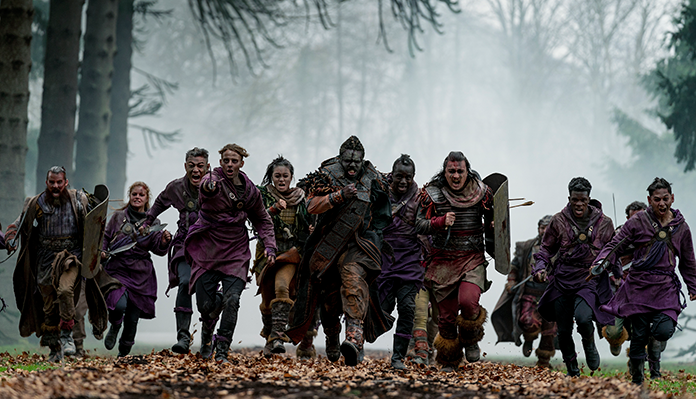 Whether during MMA bouts or in some of the best movie and TV fight scenes, a stellar finishing move is the cherry on top of a pain sundae. On AMC’s Into the Badlands, badass fighters like Sunny and The Widow are experts at delivering killer finishing moves. The gangsters, supervillains, cage fighters and other brawlers below also know a thing or two about putting a period on a final (death) sentence. Read on for some extremely brutal finishing moves from movies and TV shows, and catch even more action when Into the Badlandsreturns for its final episodes as an AMC two-night premiere event, Sunday, March 24th and 25th.

Sunny’s Ladder Kick, Into the Badlands

As one of the deadliest Clippers in the Badlands, Sunny has a wide variety of spectacular moves that put an end to anyone who dares face him. One of Sunny’s most painful “finishers” was when he used a ladder to take down some attacking troops. Wielding the ladder with the same skill he displays with a sword, Sunny performed a spinning kick before catching an enemy’s head in between one of the notches. Once trapped, the enemy is quickly dispatchedwith a powerful neck-snapping kick. The impressive combo is proof that Sunny can turn literally any common household item into a deadly weapon.

Batman has faced many villains, but only one sidelined him with one painful crunch. The Dark Knight Risestook a cue from the comicsfor the moment where Bane lifts Batman over his head and cripples The Caped Crusader with one swift knee to the back. Batman eventually bounced back, but the road to recovery wasn’t easy. Bane’s backbreaker is far more effective at putting The Bat on ice than one of Mr. Freeze’s puns.

Under the tutelage of the kung-fu master Pai Mei, The Bride learns the deadly Five Point Palm Exploding Heart Technique. After a long battle against many foes, The Bride comes face-to-face with her former employer/father of her child. During their intense final fight, The Bride perfectly executes the exploding heart technique on a thoroughly shocked Bill.

Jason Bourne proves he’s as adept with a rag as he is with a gun during his bone-breaking hand-to-hand skirmish with Blackbriar asset Desh. In the end, Bourne finishes the job by choking Desh out in a bathtub, providing a final release to a tension-filled skirmish.

The Governor didn’t take well to Michonne using his “Walker” daughter Penny as bait, and a brutal fight ensued. After nearly getting choked to death, Michonne grabs a shard of glass from a broken aquarium that had been holding Walkers and jabs it straight into the Governor’s eye. Thus The Governor gains his distinctive eyepatch, and their fight comes to a bloody end. While Michonne later introduces the Governor to her trusty katana, her first finisher was truly eye-popping.

As finishing moves go, there are few that are more epic than the perfect crane kick Daniel LaRusso executes on blonde jerkwad Johnny Lawrence in The Karate Kid. Daniel-san might have felt silly when Mr. Miyagi made him hold the iconic pose on the beach. But once he delivered that swift kick to Johnny’s smug face, the many hours of “wax on, wax off” and catching flies with chopsticks suddenly became worth it.

What’s the best way to stop an armed gunman?If you’re John Matrix, theripped ex-Special Forces colonel immortalized by Arnold Schwarzenegger in Commando, you rip a pipe off the wall and hurl it right into their stomach. And that’s just what John Matrix does after a brutal fight with the villainous merc Bennett. Adding insult to serious injury is Matrix’s joke that Bennett should “let off some steam.”

If Tony Soprano wants to finish someone for good, he’s not going to let something like his daughter’s college visiting trip stop him. In one of the most memorable kills in The Sopranos’ history, Tony leaves Meadow at a college interview to take out Febby Petrulio, a former mobster who squealed to the FBI. Tony gets the drop on Febby, strangling the rat to death before returning to his daughter. With one brutal finisher, Tony cemented his status as a wiseguy who doesn’t let family get in the way of the dirty business of taking out anyone who betrays his other “family.”

Kickboxing master Kurt Sloane finishes off Tong Po, the fighter who crippled his younger brother, with a flurry of fierce punches and a final definitive kick to the face. Sloane’s vengeance is well-earned, in a fight that builds to a bloody climax that has the crowd (and viewers) on their feet.

Mortal Kombat is known for extreme finishing moves, but it’s hard to top Shang Tsung’s supernatural abilities. After handing a beat down to his opponents in the tournament, Shang Tsung literally yanks the soul’s from his victims. This becomes particularly difficult for Liu Kang when he has to face off against all the souls that have been taken by Shang Tsung. Taking souls and then using them as a weapon? Now that’s “mortal kombat.”

For more pulse-pounding action, catch the final episodes of Into the Badlands in a Two-Night Premiere Event, Sunday, March 24th and 25th on AMC. Get a sneak peek at the fight between The Widow and The Master in the clip below. https://www.amc.com/shows/into-the-badlands/video-extras/season-03/episode-00/into-the-badlands-first-look-widow-vs-the-master1/

Take a look at what some of your favorite fighters had to say when asked what was their favorite finish move in film/tv.

Curtis Blaydes
Film/TV
You remember Romeo Must Die with Jet Li and DMX? You remember those scenes when Jet Li would like punch the guy and they would like zoom in or do like infrared and you would see the bones like snapping? I feel like he probably has the best finishing moves.
In MMA
I think it’s the elbows from your opponents full guard. It’s not the fanciest, it’s not the prettiest but I think it, you get the stack it probably has the most finishes. Pretty much what I did to Alistair. It’s basic but it’s very, very effective. And I think over the years it’s probably racked up the most finishes.

Dom Reyes
Film/TV
Mortal Kombat, man, there’s some pretty gnarly finishing moves. I think from the first Mortal Kombat movie, the most messed up one was Goro just murdering fools over and over. When he had that one dude and he was like “Finish him!” and then he snapped his back on his knee and then he just threw him on the ground and then Shang Tsung took his soul, I was like “Dang man, that’s cold blooded.”
In MMA
Probably Hendo (Dan Henderson) man, with the H bomb. That he H bombed Bisping and then jumped on him from fifty feet in the air. That was probably the most devastating one, I’ve probably ever seen, where I was just like “Ooh.”

Bobby Moffett
Film/TV
Well my favorite, the one that comes to mind to me, my most favorite devastating finishing move is from an anime called Yu Yu Hakusho. Have you ever heard of that? So there’s this character, his name is Hiei and he’s like this demon and he has this eye in the middle of his forehead. He is getting beat up by this dude, this guy is using fire powers and is burning him. And then Hiei, the fire turns like all black and Hiei uses his arm to like gather some black fire energy and he just unleashes this giant dragon from like the shadow realm or some shit. I think its called Dragon of the Darkness Flame. Oh my God, that move is so, the buildup to him doing it to the guy and how he kills him, the guy pretty much just turns into dust, like onto a wall. And it’s just bad ass like everyone in the anime is like what’s happening and he shoots this giant dragon out of his arm. And it kills this dude. And it’s uh, you should watch it honestly it’s bad ass.

In MMA
When Ngannou punched Alistair Overeem’s head off. I thought that was pretty devastating. When I saw it I thought Ngannou had possibly detached Alistair’s skull from his spine, and he was dead. The way his head jerked back it was, honestly I had never seen someones head move that way from getting hit. Jesus. That was devastating. That was bad. I wish I could punch like Ngannou.

Vicente Luque
Film/TV
You know, I liked a lot the Van Damme movies. In Bloodsport, the one that the guy blinds him with some powered stuff, and then he gets the finish after that happens, I think that would be the one.
In MMA
I would say Dan Henderson against Michael Bisping. That was pretty brutal.

Josh Emmett
Film/TV
I would just say a lot of boxing movies, straight right knockouts, overhands. But one of my all time favorite movie was Bloodsport, back in the day. Yeah, I guess, some type of right hand. KO finish.

In MMA
Kind of like Edson Barboza’s spinning heel kick against Terry Etim. It was so fast and powerful and just right on the button and that just shut the lights out. So I’d just say, just thinking off the top of my head, that’s one of the first huge finishes that come to mind.