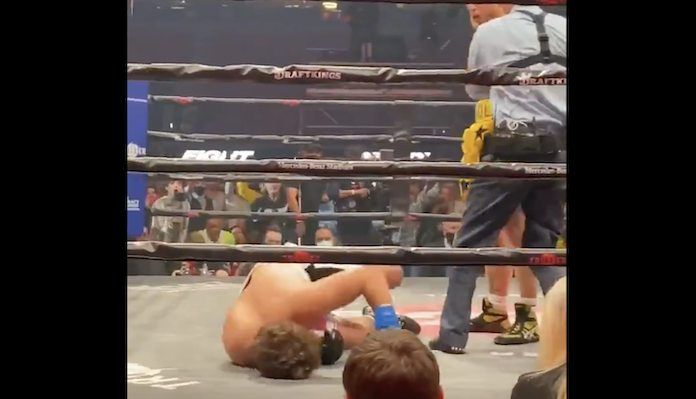 On Saturday night, Askren and Paul met in their highly-anticipated boxing match promoted by the Triller app. It was just a minute into the fight when Paul absolutely flooded Askren with a nasty right hand, dropping the former Bellator welterweight champion to the mat.

Now, check out a different angle of the knockout. The ringside view of Paul knocking out Askren is brutal, and it also explains why the referee stopped the fight when he did. You can see Askren’s legs were extremely shaky and the ref decided that he didn’t need to take any more damage. Had the fight continued, it seems likely that Askren would have been knocked out even worse. Watch the ringside angle of the Askren vs. Paul knockout below.

For Askren, the loss to Paul hurts momentarily, as he has become the butt end of jokes in the sports community for this weekend. However, at the end of the day, he is still healthy and has his family to go home to, and he made a ton of money to go through with this. According to the disclosed salaries, Askren took home a guaranteed $500,000 for this fight with Paul, so he made a good chunk of cash even though he ended up getting knocked out.

As for Paul, the possibilities are endless. This kind of highlight-reel finish could be exactly what he needs to coax out the bigger names to step into the boxing ring with him. You might not like Paul and think that he has no business being in the boxing ring, but he has looked quite strong in his first three fights and this win over Askren gains him more clout.

What was your initial reaction to seeing Ben Askren get dropped by Jake Paul?