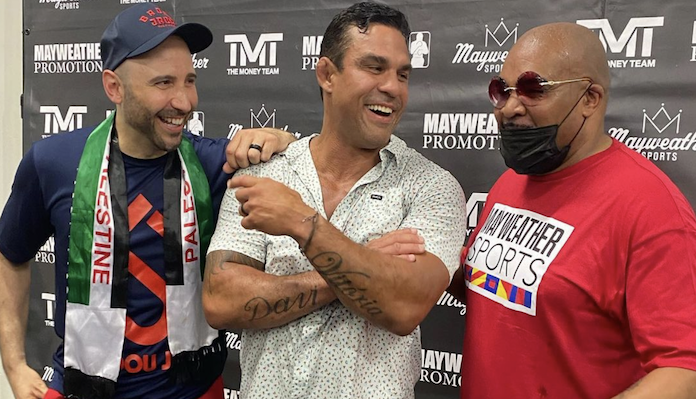 Belfort left the UFC in 2018 after getting knocked out by Lyoto Machida in his final fight in the Octagon but he was expected to fight in ONE Championship after that. However, for whatever reason Belfort never made his debut for ONE even though he was connected to several fights in the promotion. Now, we finally have an update on his ONE contract.

According to the Brazilian, who spoke to the media on Tuesday at Floyd Mayweather’s academy, his deal with ONE is nearing an end and he is now looking to venture into the world of boxing. In fact, he already knows who he wants to fight in his return to boxing, calling out de la Hoya, Silva, and even Evander Holyfield for his long-awaited return.

“I’m looking for an opponent now. I heard that Oscar de la Hoya is looking for someone to face. Oscar, don’t be afraid. Now, our agreement is about to end. We have no fight there. But this is boxing, I am free to fight boxing,” Belfort said (via AG Fight).

“Anderson would be incredible. Anderson and I, it would be a big rematch in boxing. It could be Oscar, Anderson, Holyfield. There is a list of guys who can make this happen.”

Belfort also shared a photo of himself with Leonard Ellerbe and Amer Abdallah.

Belfort is 1-0 as a professional boxer, with a win over Josemario Neves via first-round knockout in 2006. He has mentioned returning to boxing in the past but hasn’t done it until now. With other older fighters returning to the ring, it’s understandable Belfort would also try to be cashing in on the craze when there is potentially some good money to be made.

Are you excited to see Vitor Belfort in boxing?