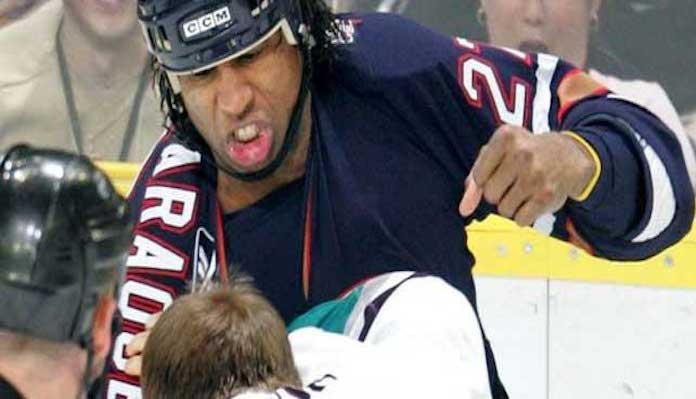 Former NHL enforcer Georges Laraque has confirmed his camp is in talks with Mike Tyson’s camp for an exhibition boxing match for charity.

Laraque was one of the top enforcers in the NHL during a 13-year playing career that ran from 1997 to 2010, playing right wing for the Edmonton Oilers, Phoenix Coyotes, Pittsburgh Penguins, and Montreal Canadiens. During his playing days, Laraque was not known for his scoring prowess, as he tallied just 53 goals in 695 career NHL games. Instead, Laraque was known for being one of the game’s best enforcers and fighters.

During his career, Laraque racked up 1126 penalty minutes and got into 131 fights, of which he won many of them. At 6’4″ and weighing 245lbs, Laraque was a very solid heavyweight during his prime. At age 43, Laraque is now retired from the game and hasn’t gotten into a fight in years. But there is a chance that he could soon do get into a brawl, this time not on the ice but in the boxing ring against the legend Tyson.

Speaking to CTV News, Laraque said that a match against Tyson is more than just a pipedream and that it’s actually in the works. According to the Montreal native, his camp and Tyson’s camp are in contractual discussions about a three-round exhibition boxing match for charity. Tyson is currently set to make his return to the boxing ring after 15 years against Roy Jones Jr., and it appears he doesn’t want to make it a one-off.

“They contacted us. They’re interested and it’s just my agent trying to find a way to get the right package,” Laraque said.

“We’re talking (about) an exhibition. It’s not an actual fight. It’s not dangerous… It’s not like I think I would have a chance against him.”

Even though this bout would be an exhibition, it sounds like it would be a more lax type of affair than the fight between Tyson and Jones Jr., which has a belt on a line despite it being on paper an exhibition. Laraque joked that since the bout with Tyson would be for charity, he would consider putting himself at risk in the last round to get knocked out.

“Maybe in the last round, I’ll put myself in position to get knocked out,” Laraque said. “I don’t know what I’m going to do. I have no idea.”

Are you interested in watching a charity exhibition boxing match between Georges Laraque and Mike Tyson?