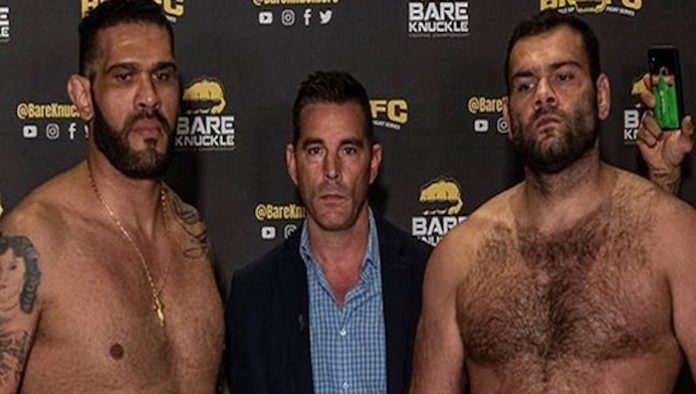 As for Silva, he had lost nine of his last 10 MMA fights and a fight in GLORY kickboxing before taking this bare-knuckle fight with Gonzaga. He has been knocked out in nearly every one of his fights in the last six years, with his lone win in that stretch coming against Soa Palelei in 2015. That’s his only win in combat sports since 2013.

After seeing Antonio Silva get knocked out by Gabriel Gonzaga, the MMA community reacted to the KO on social media. Here’s what members of the community said.

That is all… Gabriel Gonzaga takes out Bigfoot Silva in the 2nd RD @bareknucklefc #BKFC8 pic.twitter.com/fC3bJ9yQbA

Some of you deliberately sought to watch Bigfoot Silva get KTFO in his third combat sport and for about the 570th time overall in his career.

Have you no shame?

Enjoyable? Sure….but you feel like you need to shower after.

Gabriel Gonzaga getting the stoppage in the second round against Bigfoot Silva. #BKFC8 pic.twitter.com/ajGeJAFRsG

Sad that Bigfoot is still competing in combat sports at this point. Should have retired a long time ago. https://t.co/GLSIvcne8J

The members of the MMA community seem to be genuinely concerned about the health of Antonio Silva after this latest knockout. At age 40, he continues to get knocked out in devastating fashion, yet promoters continue to book him for fights. At what point do athletic commissions not clear him to fight is a question many are wondering.

BKFC may still offer Silva another fight considering he is a big name from the Florida area, where they hold some of their events. If they do book him again, ideally it would be against a much lesser opponent than someone as big and powerful as Gonzaga. At this point, Silva desperately needs to get a win. But if you ask most fans, he should hang up his gloves and officially call an end to what has been a very good overall career.

Do you think Antonio Silva should retire from combat sports after seeing this latest knockout loss to Gabriel Gonzaga at BKFC 8?