Bec Rawlings eyeing BKFC rematch with Paige VanZant: “She beat me in MMA with a really lucky kick”

The two last clashed not in the boxing ring, but in the UFC octagon. Back in August 2016, the strawweights clashed on a high-profile UFC on Fox card. In the bout, VanZant knocked out Rawlings in the second round with a switch kick.

Since that bout, both women have since departed the UFC and landed in BKFC. However, they’ve both had very different experiences in the ring. Rawlings has gone 3-0 in her BKFC career, while VanZant has lost both of her outings.

Ahead of her return this Friday against Britain Hart, Bec Rawlings discussed her want for a rematch with Paige VanZant in an interview with MMAJunkie. The Australian opined that the fight makes sense at the moment. However, she also feels that she deserves a rematch because their first bout ended in a “lucky” shot from ’12 Gauge’. 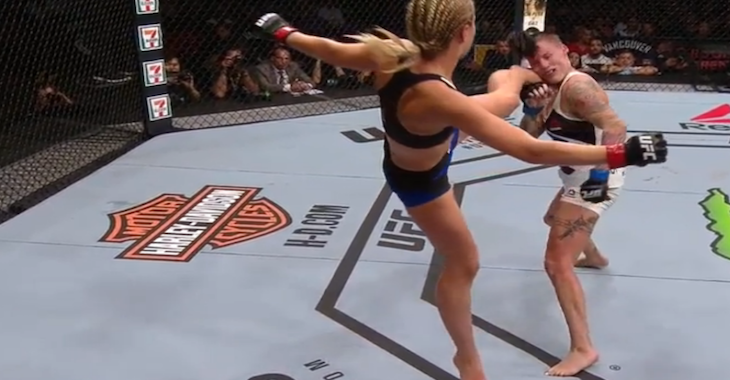 “I’ve been asking for the fight against Paige VanZant just because we both have bad blood I guess,” Rawlings told MMA Junkie. “I have a bone to pick with her. She beat me in MMA with a really lucky kick and I think I was beating that ass until she got me with that, so I definitely feel that’s a fight I want.” (h/t MMAJunkie)

Bec Rawlings continued, “That’s a fight that makes sense, but it’s obviously not a title eliminator. I think she needs to get a win under her belt before anyone talks about that… So that fight makes sense, but we’ll see what happens. I think she might, whoever they match her against, I think if she’s focusing on her boxing and changes up her game plan a little bit, I think she has a good shot.”

What do you think about a Bec Rawlings vs. Paige VanZant rematch? Sound off in the comments below!

This article appeared first on BJPENN.COM
Previous articlePetr Yan claims no one at bantamweight wants to fight him, calls out Deiveson Figueiredo
Next articleCris Cyborg blasts Cat Zingano for demanding additional testing for a potential fight: “Thinks I care what she wants”
© Newspaper WordPress Theme by TagDiv