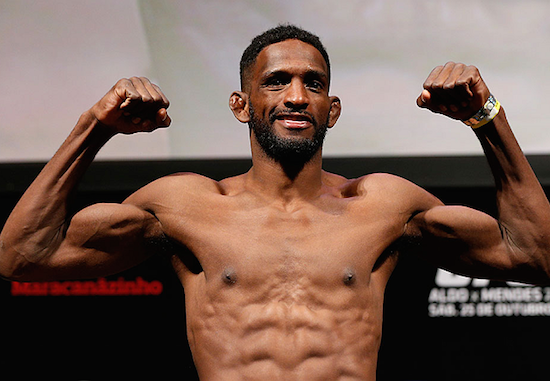 Last night in the main event of the prelims of UFC 179, Neil Magny defeated Willian Macario via TKO. The bout was Magny’s 5th fight, and win, of 2014, tying him with Roger Huerta for most wins in a year, but Magny doesn’t want to stop there.

He spoke post-fight about his desire to fight again in 2014, and break Huerta’s record.

“I just go right back to the gym and wait for the next call, who ever it may be. Whether it’s someone in the top 15 or not, I am ready to go back out there and prove my self again.”

“I definitely feel like this year showed I a force to be reckoned with in the UFC. To win five fights in one year… definitely shows my hard work and dedication to this sport.

When asked if Magny was interested in fighting again in 2014 he quickly responded:

“Definitely. I’ve been blessed to go into that fight and walk out of there without a scratch on me. So if they have an opportunity to fight a sixth time this year, I will definitely accept it and keep going.”