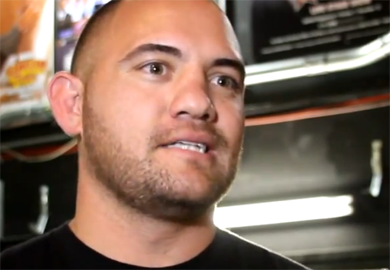 Rampage Jackson: “Honestly I don’t think a person who tests positive for marijuana should be penalized in an athletic sport, because he’s already penalizing himself by taking the marijuana. It don’t enhance your performance. It kind of dulls it, in my opinion. I don’t know, I’ve never even trained [on] marijuana before. You know what I’m saying? I feel like marijuana is an herb, and it’s from the earth, and as long as it’s in its natural, I don’t see nothing wrong with it. As long as you don’t abuse it. That’s my opinion, as long as you don’t abuse it.

“If a fighter or athlete tests positive for marijuana, he already messing up his game. So don’t penalize him.”

Ed Soares: “I don’t have any thoughts. That’s unfortunate for him. I don’t see how marijuana is an enhancing drug.”

Travis Browne: “Whether [marijuana] is a performance enhancing drug or not, it’s not socially acceptable. The mom and pops still aren’t cool with it. And us, as athletes, have a responsibility to take this sport to the next level. When you have guys doing that, it kind of blows it for us.”

Eddie Alvarez: “What’s that, a recreational drug? It’s all drugs. To each his own. Some people smoke weed. Some people do steroids. Some people drink alcohol. Who are we to judge, man?”

Tyrone Spong: “No, no. I’m from Amsterdam. So, next question.”