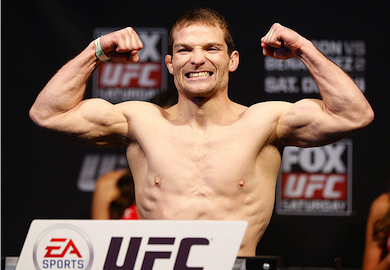 Scott Jorgensen had a strong beginning to the first round by dictating where the fight went and getting the better of Makovsky while standing. Jorgensen’s striking looked as crisp as ever and he seemed comfortable enough to attempt risky strikes like spinning backfists. The tables turned almost exactly in the middle of the first round when Zach Makovsky cracked Jorgensen with a short left uppercut. Jorgensen was clearly hurt and Makovsky fought intelligently from there, continuing to pick his shots and not go for broke. Jorgensen’s demeanor and pace did not change, but he wasn’t the same after he ate the short left. Makovsky cracked Jorgensen with two more lefts, one of which wobbled Jorgensen and made him stumble back.

The first round ended with Makovsky sweeping Jorgensen on his back after utilizing his butterfly guard.

The opening moments of the seconds round was even. They swapped dominant positions by securing takedowns, but neither man took advantage of it. Jorgensen almost locked in a guillotine choke but Makovsky defended well and escaped danger quickly. Jorgensen spent more time on top of Makovsky and was able to land some grinding strikes like dragging-forearms and short punches.

Makovsky finished the second round strong by landing a head kick and a superman punch, so he may have done just enough to steal it.

Former Bellator champion Joe Warren cornered Scott Jorgensen and gave him a speech telling him it was “now or never” and he had to fight hard in the third to win it all. Jorgensen definitely turned up his offense in the third round.

Jorgensen circled around Makovsky and landed a few strikes before he got slammed to the ground. Makovsky’s slam was reversed right away and Jorgensen was on top of his opponent in no time. They switched dominant positions on the ground after reversing each other but neither man was able to land anything big.

Standing back in the middle of the octagon, Jorgensen landed a knee in the clinch after eating a right hand. Makovsky took Jorgensen down but Jorgensen was able to spin through and almost land a guillotine choke. Makovsky never stopped defending the roll-through and turned it into a reversal of his own. He ended up on top of Jorgensen and took his back with thirty seconds remaining. Jorgensen fought off a rear naked choke attempt until the last horn sounded, signifying the end of the bout.