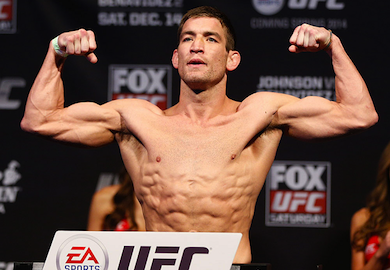 Both Stout and McKenzie went right to the middle of the octagon at the start of the bout and the feeling out process was almost non-existent. Stout was taken down within seconds and McKenzie smothered him from the get-go looking for a guillotine.

McKenzie has won eleven bouts by guillotine throughout his career, and Stout was well-prepared to defend this technique.

Stout was quick to escape McKenzie’s attempt and escaped during scrambles where McKenzie started looking desperate to lock in his signature hold. Stout started to gain confidence and loosen up as the round went on and he eventually dropped McKenzie with a punch to the solar plexus. He commanded McKenzie to stand up then landed another shot to the gut. Stout walked back to his corner feeling redeemed of being taken down, and McKenzie walked back to his looking down.

Stout started off the second round strong by stuffing McKenzie’s takedown attempt. Other than landing the occasional jab or fading hook, McKenzie’s striking was nullified. Stout did a fantastic job countering McKenzie’s strikes and even knocked him down by catching his leg and popping him with a hook. Since being dropped with the solar plexus shots, McKenzie was cautious about his body and favored covering up his midsection. The result of that allowed Stout to land leg kicks and head strikes at will. McKenzie walked back to his corner at the end of the second looking frustrated and dejected much like he did in the first round.

The third round was a combination of the end of the first and the entire second round. Everything went right for Sam Stout and everything went wrong for Cody McKenzie. Whenever Stout ducked away from McKenzie’s strikes, it was perfectly timed and he countered beautifully. Just like in the second, McKenzie landed random strikes here and there but a majority of his punches were desperate looking; Cody knew it was do-or-die but he just couldn’t get the job done.

Cody McKenzie was almost able to cinch in a leg-lock at the very end of the fight, but the sweat allowed Stout to slip right out of danger.

At the end of the judge’s announcement, Sam Stout earned his first victory since UFC 157.