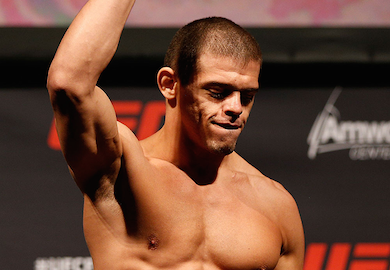 Everything Calo Magalhaes threw had knockout potential and it was only a matter of time before someone got caught with a big shot.

Luke Zachrich took a left uppercut to the Solar Plexus and it all went downhill for him from there. Magalhaes followed up with an overhand right that sent his opponent bouncing off the fence. It was obvious that Zachrich was not out of it in terms of consciousness, but he was clearly unable to catch his breath and his defense suffered from it.

Magalhaes dropped Zachrich with a knee to the body and blasted him with a couple more shots. The referee had seen enough and waved off the fight. Zachrich tried to argue that it was a bad stoppage, but the replays proved the referee’s decision right.

Calo Magalhaes def. Luke Zachrich by way of TKO (Strikes) :44 of Round 1